With apologies and a hat-tip to Chris Sims of "Chris' Invincible SuperBlog" fame (via his new digs at Comics Alliance), I would like to return to the wellspring of all things super-fashionable, the 1990s.

Take a look at "Forge" as he poses for an action-packed conversation: 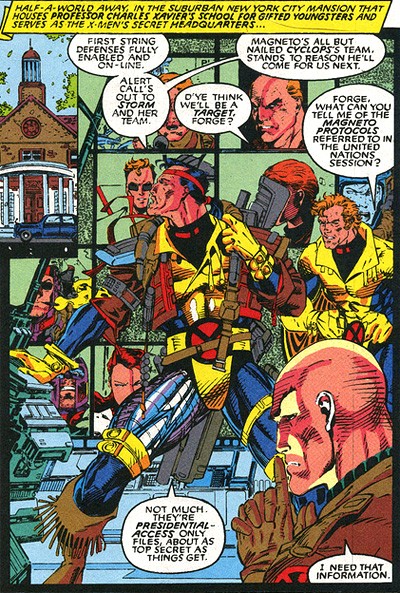 I'll let Chris take it away:

For a while there I couldn't figure out if the most hilarious thing about this panel was the fact that he's wearing Wonder Woman's new jacket over a jacket over a turtleneck, or the his spread-legged Computer Usin' Stance, but then I noticed the crown jewel: In order to show off his cybernetic leg, Forge has manufactured an individual pant leg out of spandex and belted it just above his knee.

Couldn't agree more, big guy. Also, how hard is the air conditioning blowing in this place? That bandanna looks like it's alive, whipping about in a mad fury. Apparently it's enough of a hazard that it's severed the head of the unfortunate sunglasses-wearing gentleman behind Forge's shoulder. That takes some serious BTUs, folks.

Finally, I can't wrap my head around that one strap running down his left side. It just ends at his crotch, which forces me to wonder what in the hell that buckle attaches to. I pray it's actually free-floating, because if not ... ouch. Does he have to think about baseball scores and math to make it unbuckle?