If you haven't seen it yet, Entertainment Weekly features a still of Ryan Reynolds (?!) in the Green Lantern costume from the upcoming movie: 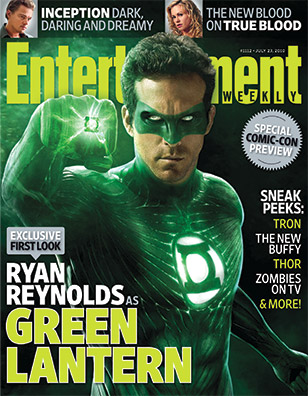 Can't say I'm a huge fan of the glowing muscle ligature in the design, but as always you have to see it in action first. And that looks more like a Photoshopped head on a CGI body rather than an actual photograph, but what do I know -- not only did I not know Ryan Reynolds had been cast, I didn't even know there was a movie coming up. Ignorance is bliss, I reckon.