For the first time in almost fifty years, Wonder Woman is getting a major makeover courtesy of J. Michael Straczynski: 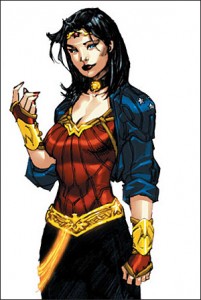 And of course, it happens on Bad Costume Wednesday. Fate? I think so. Of the rationale behind the new costume, in aninterview with CBR's Kiel Phegley, he explained:

Form follows function. She has to exist a great deal in an urban setting. So I wanted her to have an outfit that she can close up and pass more or less without notice, or open when she's in a fight to reveal her full appearance. I wanted the outfit to express her own situation, in that she lives in two worlds, which is also in a way the trap in which she's found herself.

I also wanted it functional. As so many female fans have said over the years, "How does she fight in that without all her parts popping out? Where does she keep stuff?" She can keep or shed the jacket, there are pockets, it's tough and serious looking while still attractive. It's a Wonder Woman designed for the 21st century. Not to get all "Project Runway" on this, but what woman wears the same outfit for 60 years without at least accessorizing?

They're also retconning her origin, via the time-honored "Gods can do whatever the heck they want, including destroying and rewriting the timeline" hook. They've destroyed Paradise Island, leaving Diana the baby to be smuggled off the island and to gritty urban America to be raised. I suppose the Kents were busy.

I doubt I'll be reading the book since so far I haven't been able to find a comics shop here, but I'm not overwhelmed by this look. I immediately thought "Black Canary" when I saw it, or any one of a dozen X-Men or X-Factor female characters from the Nineties. It's just kind of boring and Madonna-ish for me.

I also don't really see Wonder Woman as a street-level, down-and-dirty, gritty urban fighter. She's like Superman, someone who ought to be in the sky, duking it out with gods and aliens and giant monsters threatening whole cities, not drug pushers and gangbangers.

But hey, he's JMS and he knows what he's doing. Although, he did come up with the whole Spider-Man Mephisto concept allegedly, so ...

Anyway, what do you think?