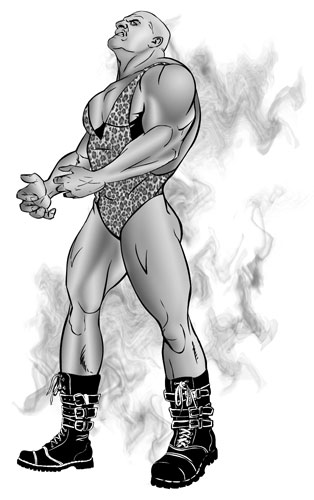 Since my buddy John and I have both done interior illustrations for various RPG modules (he even did the original cover for "Champions of the North"), I wanted to ask about what you do for visuals in your games. Obviously computer RPGs have their own graphics, but for good old fashioned pen-and-paper, how important is it for you to be able to visualize what's going on and who you're fighting? Does your GM give you printouts of images that enhance the mood?

When you're leafing through a game supplement in the store, how important are the illustrations to your buying decision? Or do you even care about them at all?

I ask particularly because HM was started in part to let GMs get Full Color Visuals to show their players, prompted largely by the ongoing campaigns John and I were in. Plus we got kind of tired of having to do all the drawing, which, if it wasn't our own adventure, ruined the surprise of the characters we'd encounter.

If you or your GM have used HeroMachine images in a campaign before, how were they used? Did they go over well?

Setting HeroMachine aside for the moment, what else does your GM do to help "set the mood" for the campaign? I know some will put on a custom mood-mix CD for audio effects. Others use miniatures and maps. I'd love to hear what works for you, what you like, what you hate, and if all that stuff matters at all or if it's more than enough just having the descriptions.