RPG Corner: One if by land, two if by interdimensional portal broom 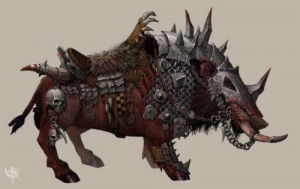 This week's topic is getting around, and I don't mean what happens if you eat too many donuts.

A lot of travel in RPGs can come down to your GM waving his hand and declaring your characters are where they wanted to go. But it's a lot more fun when your mounts get brought into the picture. Whether your ride is a battle-trained pure Arabian stallion or a fusion-powered time-traveling DeLorean, transportation can be the key to fun.

So what's your favorite ride from any of your RPG exploits? How do you get around when you have the choice, whether by air or sea or ground? Have you ever had a vehicle or mount that was truly bizarre, memorable, or just flat-out fun?

24 Responses to RPG Corner: One if by land, two if by interdimensional portal broom