Ladies and gentlemen, courtesy of the 1994-era Landmark Entertainment Group, I would like to show you what happens when you let a committee of marketing weasels design a super-powered character: 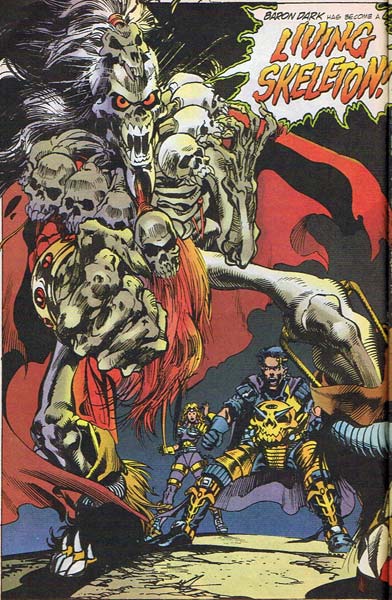 Marketing Weasel Boss (MWB): We need a head villain to go with this whole Skeleton Warriors toy line.
Marketing Weasel 1 (MW1): Well, "skeleton" is right there in the name, I say we do something with that.
MW2: Great idea!
MW3: I definitely think we should play up the whole bones angle, you know, do away with all the skin and flesh and just do bones!
MWB: I think that's what a skeleton is, Bob.
MW1: Hey, you know what skeletons have instead of heads? SKULLS!
MW2: Eeeeww!
MW2: That is so true!
MW3: Wow, yeah, that would totally fit on the body of bones! And you know what, since this guy is the head of the bad guys, and his head is a skull, we could really drive home the branding message by repeating that motif ...
MWB: You mean ... ?
MW1: That's right, skulls everywhere! Even kids can't miss that. Like maybe he has this big skull necklace.
MW3: And a skull on his shoulder pads!
MW2: Lots of skulls on his should pads!
MWB: Hey, I know, let's make his shoulder pads entirely out of skulls!
(General alarums and excursions and applauses and whatnot, huzzah!)
MW2: I like the way you think, Boss!
MW1: I don't know if we really nailed it yet, though, I feel like there is still some low-hanging fruit.
MW3, sotto voice: Not on a skeleton there ain't ...
MW2: Well ... If having the head of the skeletons have a skull for a head is good ...
MW3: And if repeating skulls everywhere is better ...
MW1: Then ... we could ... yes! Put a skull on his skull!
(General alarums and excursions and applauses and whatnot, huzzah!)
MWB: Brilliant! Have some dweeb in Art draw it up and send it to manufacturing, we're geniuses, gentlemen!

I certainly think that scenario is plausible, at least.