Look at this vibrant Golden Age lineup of spandex-clad super-heroes, led by none other than the redoubtable Big Red Cheese himself, Captain Marvel: 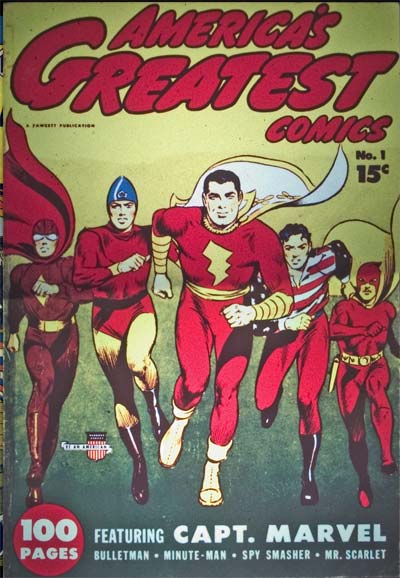 Sadly, the only one of these valiant warriors from a bygone age to survive into the modern universe is Captain Marvel. His outfit hasn't changed a stitch in all that time, which I guess shouldn't surprise anyone since Billy Batson never hit puberty either, despite fifty years to bake. I guess the lightning giveth, and the lightning taketh away.

His fellow adventurers were not so fortunate, sadly, and except for Bulletman have largely disappeared from the face of comic-dom.

That's where you come in.

Your challenge this week is to bend your enormous creative skills (with a little help from HeroMachine, of course) to the task of reimagining one of these other four masked men. Take their fundamental concept and twist it, change it, tweak it, update it, make it modern and cool and stylish. And of course, that means they need new threads, because these supporting cast-members don't have all-powerful wizards flinging thunderbolts around to quell the fashion police.

From left to right on the cover, your targets are (click to get more info on them) Spy Smasher; Bulletman; Minute Man; and/or Mr. Scarlet.

You have one week! On next Monday, I will select the best proposed redesigns and post them for a community vote for the overall winner, who will as usual receive their choice of any one item of their choice, or a portrait of themselves, to appear in the final HeroMachine 3 program. Their character, along with the runner-up, will also be featured in a prominent ad on UGO.com to be seen by millions of visitors for the week.

The other rules are the same as always:

Good luck everyone! And sorry this is so late, in the mass of contest posts earlier I somehow forgot to do the new one. Thanks to Danny and Kaldath for poking me.