Marvel gets dinged twice on this one, once for the compulsive labeling of Black characters by putting "Black" in their name, and again for indulging their penchant for bad costumes: 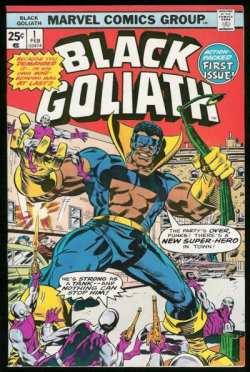 Memo to all you aspiring super-heroes out there: Popped collars are not cool. Especially when there's no cape attached. You can't totally blame Black Goliath for this, of course, since he was just going by the modest success of Iron Fist and his outfit: 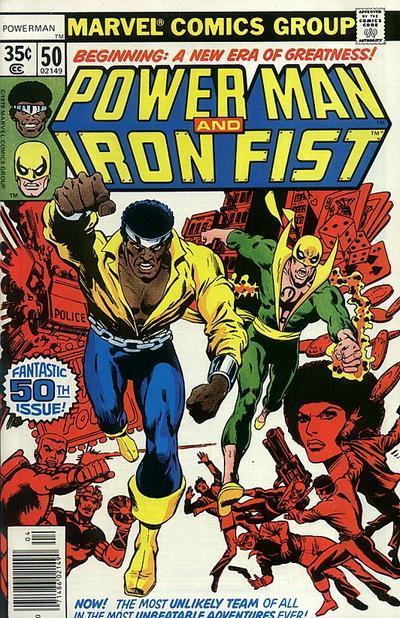 Of course, Iron Fist has other problems to deal with, notably the fact that he's running around in green Capri pants and slippers, so maybe he just hadn't noticed yet what was going on with his fake cape collar.

Black Goliath, however, has no excuse for that abdominal cut-out look he's got going on. Girlfriend, that's just sad. Even though at his size his six-pack abs are more like kegs, there's just no way that kind of thing makes sense. How does it stay stuck to his pecs, for one thing? And in what kind of temperature profile is something with that design comfortable? Maybe if you have super-sensitive nips and pits, you'd want something like this, but otherwise I don't see it.

Sadly, Black Goliath never really took off as a mainstream character, due either to his incredibly redundant power set, his obnoxious name, or (most likely) that costume. At least you'd think the costume was key to his demise, but don't put anything past old-school Marvel, because like an unwanted zombie guest at your wedding, the outfit rose from the dead at least once: 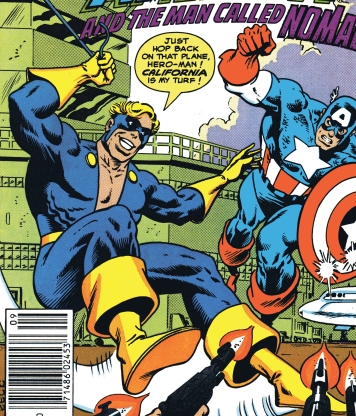 Of course Nomad was also canceled, so maybe we can credit Marvel's audience with good fashion sense, even if the Bullpen struck out.

(All characters and images are copyright Marvel Entertainment Group, Inc.)

3 Responses to Always bet on Black. And pop collars.