Picking apart individual aspects of Rob Liefeld's art is easy, but sometimes you need to step back and take a look at the "big picture" as it were, a point I was forcibly reminded of when I stumbled upon this example: 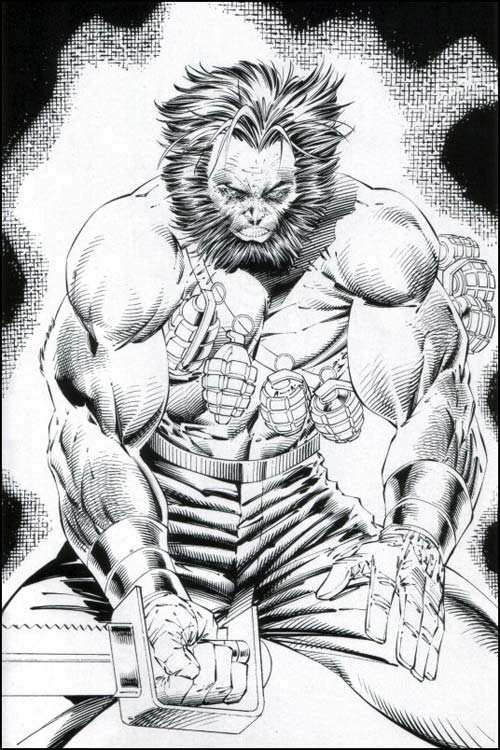 This one has it all, folks, in a much subtler way than you might expect. We'll take it from the top.

First of all, props to Rob for using cross-hatching in the background. It's still an amorphous blob just taking up space, but at least he -- or more likely, the inker -- used an actual artistic technique for the rendering. Still, the use of something, anything, to take up space in the background instead of an actual scene is a big Rob Liefeld staple. This one has the advantage of a random shape and random lines that add nothing to the composition except a vague feeling that this gentleman is about to be eaten by an amoeba.

Which explains why he has an enormous sword bared and ready, up to and including the serrated edges on the top of the blade. I'm trying to figure out why you would want a sword with the rippy bits up there, and I am coming up blank. If you wanted to saw with it you'd have to either do it underhanded or the knuckle guard would get in the way. Of course a nonsensical melee weapon is also a Rob Liefeld staple so we welcome it nonetheless.

But why obsess over a sword when you've got grenades! Because just one weapon is never enough for Rob Liefeld, we thankfully have at least seven, hanging from a bandoleer that's skin-tight across the chest but miraculously loose under the shoulder blade exactly where he needed something to take up space. How lucky! Or course it's possible those grenades are not part of the other ones, and instead represent some sort of clever underarm explosive device. Because who needs deodorant when you've got C4, amirightfellahs?!

Somehow I've gotten this far without talking about the head, which is just chock-full of awesomeness. You've got the face frame of hair, including longer hair on the cheeks than you'd find on Rapunzel's noggin. I'm a fairly hirsute fellow and no way in hell I can grow whiskers like that, but I reckon that's why I write software instead of launching high explosives from my pits.

But it's the actual face that really nails this as an authentic Liefeldian production. This one has it all folks, the skin pulled taut to the skull, the tooth-baring grin that couldn't possibly fit on a face with actual jaws, the sullen mismatched eyes, the excessive lines, this is a veritable masterpiece of hack. Throw in the enormous noggin, cleverly concealed by the aforementioned mane of not-Wolverine hair and it just takes your breath away.

But wait, there's more! Because when I say this drawing has the "whole package" of Liefeld hackery, I mean that literally. I rarely give this advice outside a FedEx delivery station, but check out that guy's package. Either he's going Mr. Greenjeans on us with the hiked-up waist line or you could fit his entire alien-like head in that space. And the cross-lines! Good lord, what's going on in there?! "Yes, is this Marvel HQ? I think I found where Wolverine is hiding ..." Maybe that's why he looks so constipated; there's nothing like a rabid super-hero with metal claws trying to escape from your pants to make you glad you're armed to the teeth.

And that, my friends, is reason number 11 why I hate Rob Liefeld's art.

34 Responses to Reason #11: The Whole Package