Many thanks to the many entries for the "Angels and Demons" character creation contest! We had 74 entries, which is fantastic, and as in the first three contests the quality was quite high. After the jump I'll display the ones I thought were particularly deserving of mention, and then finally the overall winner. If you don't see yours here it's not that it wasn't good, it's just that I only have so much space. Thank you very much for entering, everyone!

Alais amazed me with his illustration, because it's one of the rare examples of someone doing something with my program that doesn't look like I am the one who drew it. Which hurts my brain, but is simultaneously very cool: 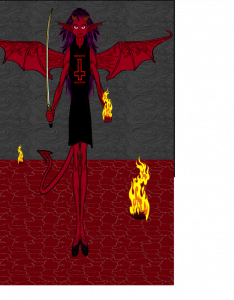 The consistent scaling and color scheme combine with a clever design and a minimalist setting to make an actual composition that's very striking.

Next, Andre had several entries that I liked a lot, but I just wanted to choose one to highlight here. Check them all out, though, they're really nicely done. This is the one he calls "Final Drayar Angel", and I chose it because a) it's a nice looking illustration, b) I liked the way the different sash lengths combine to make a new loincloth effect, and c) I like the way the weapons echo the wings. 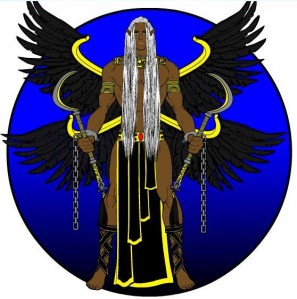 Apollyna turned in a fairly traditional conception of an "angel", but I think this is an excellent example of how important your palette selection is for making a solid, interesting drawing: 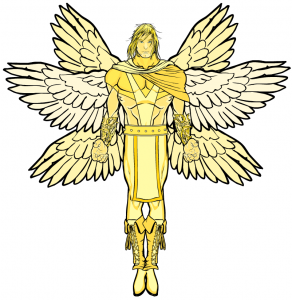 The multiple wings are nice, along with the hand selection and as I said, the yellow/off-yellow colors really set the whole thing up for success.

I think my favorite part of Dan's "General Baal", besides the "I am totally nuts" facial expression, is the way he used shoulder pads to make big ol' honkin' Frankenstein boots: 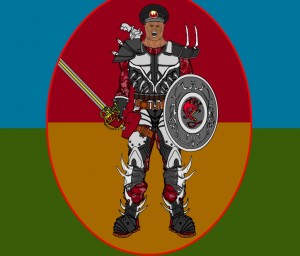 Certain design elements showed up several times, as you'd expect given our shared cultural iconography when it comes to angels, but I think Darkvatican did a nice job personalizing his angel with the multiple flame effects and the Namor-like ankle wings. The two-part upper tunic with the loincloth looks great together, thanks to his consistent coloring on them. 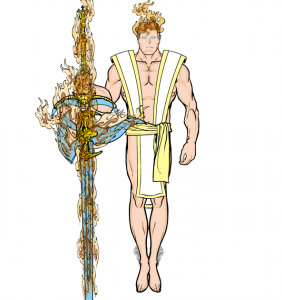 My favorite of Darkvatican's entries, though, is this fallen Lucifer: 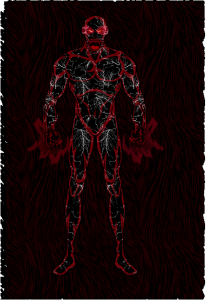 Look at those wicked cool hands! I just love the semi-transparent look, and how they seem to float over the "real" hands thanks to the patterning. A really inspired effect, I love it.

Hammerknight always brings something new to the table in terms of creativity, and this week is no exception: 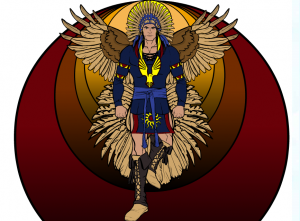 Most people heard "angel" and immediately went with a European conception, but Hammerknight took a different tack with his Native American interpretation. It's a really nice shaman-rific look that still works into the overall concept. Nice job!

Iago mentioned in his entry that he had the hardest time making this wine glass, which I can believe because I have no clue how he did it at all: 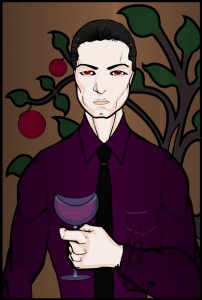 More than fancy effects, though, much like Alais he manages to create a unique feel to this illustration through the use of coloring and the subtle rescaling of some of the facial features. This guy has a real sense of personality, and the image overall looks like a professional illustrator did it. It really strikes a chord.

Isia also has an ability to put together extremely coherent and interesting compositions, and her "Demon" is no different: 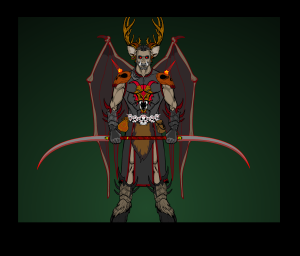 What drew me to this one was the deer antlers, to be honest. I love me some "Hearne the Hunter".

I was really close to choosing LoneWolf's "Isilrun" as the winner: 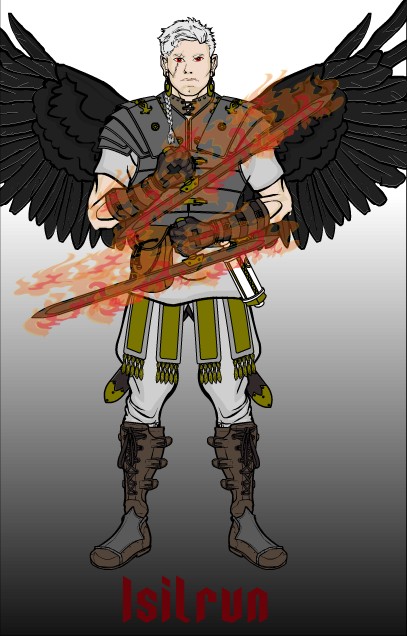 He really nailed the "hard-bitten angelic fighter" vibe here, particularly the combination of the flaming swords with the muted clothing colors, the combat boots, and the eye scar. This guy looks like he has a story to tell, and I want to hear it!

I don't have anything particularly intelligent or insightful to say about Timespike's "Lonely Warrior", I just think it looks cool: 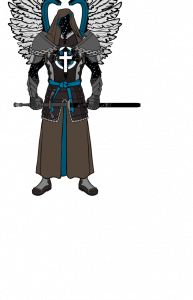 I love how Worf put this scene together, it was completely unexpected: 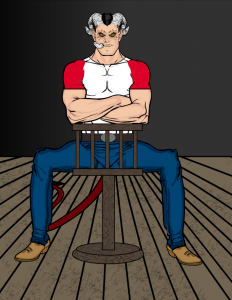 Finally, your winner really blew me away. When it came up on my screen I just stared at it for a few seconds. My first thought was "Wow, that's cool." My second thought, which still hasn't been resolved, was "How the hell did he do that?" He's got a great philosophical underpinning to go with it too, which I encourage you to read. Here it is, the winning entry for the HeroMachine Character Contest 4: Angels & Demons", Solander's "The Inhuman"! 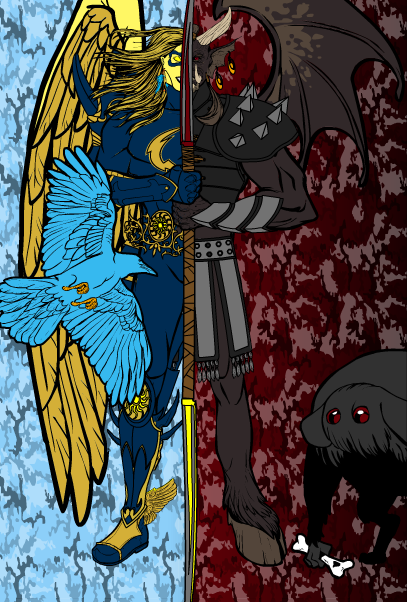 Isn't that neat?! Great job Solander, and all of the Honorable Mention/Finalists above, not to mention all of the other great entries submitted. I'll post the next contest here in a little bit, but in the meantime, keep on bringing your imaginations to life!