Plight of the Haberdasher

Women suffer for fashion, whether it's cramming their feet into way-too-small high heels, tying themselves into the torture devices we call corsets, or -- as in this case -- crushing their skulls into a face-deforming gigantic time-release medicine capsule: 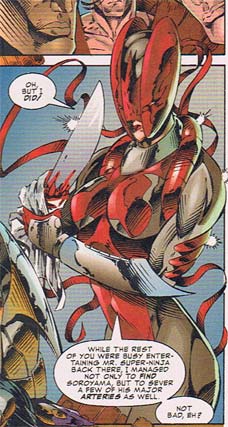 That's "Lethal", as rendered by Jeff Matsuda in the 1993 Issue Zero of "Brigade" from -- wait for it -- Image Comics. Shocking, isn't it? Let us count the ways this headgear sucks:

Besides the helmet, the costume has other difficulties as well, starting with the fact that her breasts have been ripped off and stitched to her collarbones. That's gotta hurt. Then she's got that ribbed shoulder collar thing that makes her look like an NFL linebacker: 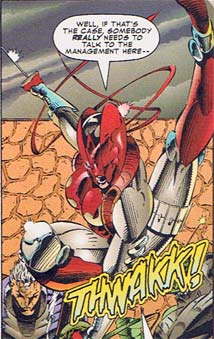 Of course you also have the obligatory thigh-purse full of completely-inaccessible pouches of whatever and the incredibly flexible armor with full-on ankle joints that have hinges for no reason, since they don't actually connect to footwear.

So you can forgive Lethal if she appears a bit cranky; you would be too if your face were being crushed and eaten by your helmet. She's not the first woman to suffer for fashion, and thanks to her handy-dandy swords, she won't be the last.

13 Responses to Plight of the Haberdasher