Like TV networks or Hollywood studios aping each other's worst show concepts, DC and Marvel have an unfortunate tendency to swap really bad characters. At some point Marvel was apparently desperate to compete for the massive Australian-weapon-aficionado audience DC had hitherto cornered with Captain Boomerang, because they invented their own ridiculously-attired villain named, cleverly enough, "Boomerang":

Yes, like bad fashion, super-powered concepts also have an irritating tendency to come back again, and it's certainly appropriate in this case given the characters' names. I didn't think it was possible to design a more ridiculous costume than Captain Boomerang's, but Marvel has certainly achieved the unlikely here. How the hell do you run around with two back-to-back slabs of wood (or metal or handwavium or whatever) strapped to your chest? And though it's not clear in this frontal image, he's got two more stapled to his back! To illustrate how ridiculous this looks, take a gander at this action triptych from "The Official Handbook of the Marvel Universe": 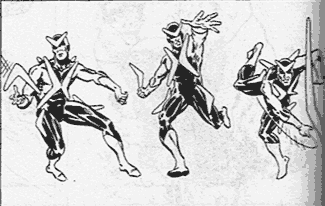 If I saw this idiot running down the street towards me, boomerang handles jutting out at odd angles all over the place, I'd laugh myself silly. How does he even sit down without one of his belterangs jamming a hole in his diaphragm?

And if you think I'm out of line in coining the term "belterang", here are just a few of the weapons listed for the big guy in the Handbook:

Given all that, I think I'm safe in classifying this costume design a "Wankerang."

9 Responses to Boomerangs always come back