If the concept of a "Shane and Sia The Barbi Twins 16-Month Swimsuit Comic Art Calendar" doesn't strike you as a terrible idea, then perhaps the installment for "March, 1996" will change your mind: 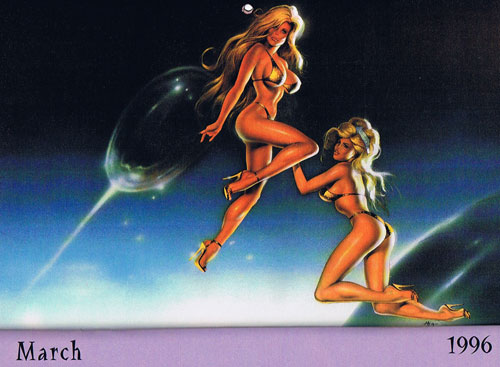 I feel this qualifies as a "Bad super costume" because a) it's a "comic art" calendar, b) the artist, Peter Hsu, worked in the comics industry (granted, on "The Barbi Twins Adventures", but still), and c) they are being attacked by a Giant Intergalactic Space Sperm, which could only happen in either a comic book or a bad John Holmes movie.

Also, one of the twins (I can't tell if it's Shane or Sia, as if that really matters) is making a "Spider-Man Webslinging" hand, which clearly is a comic book reference. I don't specifically recall Spidey facing off against a Giant Intergalactic Space Sperm, but he did fight Galactus once or twice. I leave the rest to your imagination.

Having established that this image is a bona fide target for comic book investigation, I have to ask the following questions:

OK, I lied, I don't really want to know the answer to that last question.