On the one hand, I have to give them credit for giving a hero to a group who routinely gets discriminated against. But on the other hand ... Captain Obese? Really? 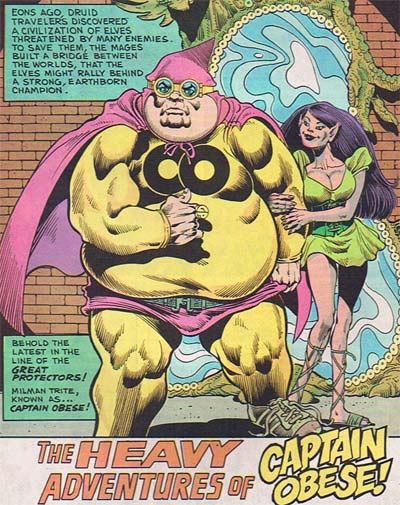 So to recap, we have a really really fat guy (I can call him obese, it's right in his name), who inhabits a fantasy world full of hot female elves, while wearing his underwear and sneakers. I fail to see what's imaginary about any of this, I could find you two dozen real-life examples of exactly the same thing by spending half an hour at my local comics shop. And that's not even including myself!

(Image and character ©1986, Don Lomax and WaRP Graphics, Inc., from the Annual which also includes "Thunderbunny", sentient unicorns, and kung-fu pandas. I shit you negatory.)