Cats, bats, and clones, oh my

OK, I know, he's supposed to be a Batman rip-off, but seriously: 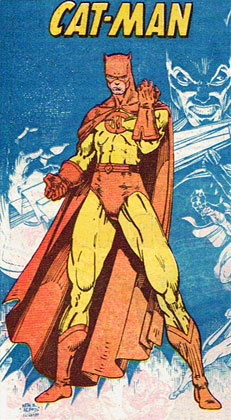 Cat-Man? Were Flat-Man, Fat-Man, Gnat-Man, Spat-Man, Hat-Man, and Rat-Man all taken by some other comics company and thus unavailable? I suspect this guy stole a Golden Age Batman mask and dyed it orange, because those ears look awfully similar, but the logo -- well now, the logo must be 100% his own creation. The big ol' C with the smaller M in the middle (his initials, get it? get it?) are the real stroke of genius that make it clear that this guy is no ordinary knockoff! I can't wait till the issue where we go to his secret lair, "The Litterbox". Or would that be the "Cat House"? I guess not, since he's based in New York and we all know how the government there frowns on that sort of thing.

7 Responses to Cats, bats, and clones, oh my