I actually met X-Files replacement Annabeth Gish once when she was in Texas working on the TV movie "True Women". She seemed like a very nice lady, and I suspect she would not be pleased to know that in comics, her name is the sound a cyborg's head makes as it's punched off its neck by Brad Pitt (if he were a giant other-worldly Hulk rip-off): 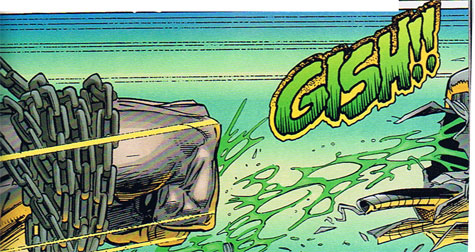 I wonder what other celebrity last names are matched with shocking and inappropriate sound effects? Perhaps one day we will see OnomontoPOWia references like "JOLIE!" as an ill-fated henchman gets impaled. "CLOONIE!" might be the sound of a gigantic Nazi-style zeppelin meets Captain Death's grenade launcher. I'm sure there are others, but for now I feel like I've been Gished and can't think of what they might be.