If you've ever wondered what would happen if a rock singer dressed like a hippie became endowed with the power to scream people into horrifying visions and occasional amnesia, then go to a White Snake concert. I kid! Seriously, if you've ever wondered that, then the odds are fairly good that you have at least one thing in common with said hippies, and I'm not talking about wearing a peace symbol.

Regardless, Marvel Comics has beaten you to the punch, my brownie-munching friend, because Daredevil #100 brought us the sonic aweseomeness that is ... 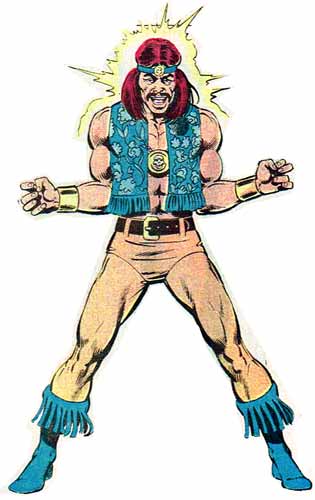 The description of Angar (get it? Angar=Anger!) accompanying this image in "The Official Handbook of the Marvel Universe #1" says he was a rock singer, but come on, clearly this is a hippie. I live in Austin, Stoner Capital of the South; I know me some hippies, and Angar the Screamer would be right at home on Sixth Street.

And if there's one thing hippies don't do, it's scream. At least, not in angar. Anger. Whatever. If he were named "Melloe the Crooner" I could buy that, because this guy seems more likely to be sitting in the middle of the street, staring at his hand saying "Dude, the colors are so intense". As for leading a life of crime and trying to duke it out with Daredevil, I don't think so. I could see him trying to crash on Daredevil's couch and making a move on his "old lady" after an all-nighter with a peace pipe and "The Doors" playing on the wi-fi, but not all-out fisticuffs.

Still, Daredevil's about the only super-hero in the Marvel universe I could see lasting more than a page with Angar, because a hero who wasn't literally blind would immediately know he's just a lonely hippie, bring him to a head shop, and be done with it. But then, Daredevil always has had Angar management issues ...

(Image and character © Marvel Comics, from "Official Handbook of the Marvel Universe #1", 1983.)

2 Responses to Angar the Screamer