Alright, I do have to admit something. I didn't take as many pictures as usual. I also didn't take many of the venue. Unless we were taking pics of each other or with other people, we never really remembered to take pictures of our surroundings. To be honest, we spent a lot of time talking with people and we took in several panels, so it just didn't happen. So there's that.

The good news is, I kept forgetting to take pictures because we were having such a good time! It was a smaller con, being as it was the first year and also not put on by an established convention running-company . But that made things more relaxed and more intimate. It didn't seem as nearly as hectic as Regina was, and maybe that's just because that was our first con, but Regina was also much larger. I dunno, but I enjoyed the more relaxed atmosphere. I felt like we were able to talk to more people and for longer, especially vendors and guests. I suppose also not carrying around my giant axe and trying to keep spatial awareness of that friggin' thing all day probably helped.

We also got to take in more panels. They were held in the auditorium... wait, a quick aside. Bran-Con was held at the Westman Centennial Auditorium, which is located on the corner of the Brandon University campus. 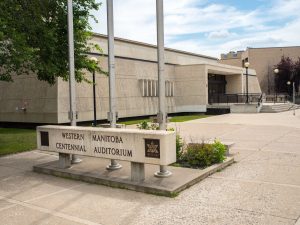 Okay, 'Western Manitoba'. No one actually calls it that.

Not the same location that the cancelled convention was supposed to be at, but it's a really nice place. Anyway, panels. They had something continuously going throughout the weekend, whether it was a panel, or a sketch battle, or a book reading. There was even an escape artist (side note, there's nothing like watching someone escape a Russian Death Tank to really get that anxiety spiking)! Anyway, this was the schedule: 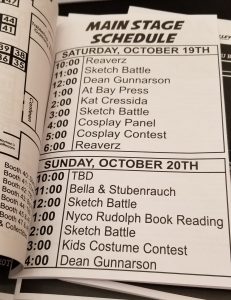 We ended up taking in quite a few of these. I liked the more continuous flow that happened with panels. Regina was a lot more sporadic (and all the ones I wanted to see I didn't get to because they were on the Sunday). I hate to keep comparing the two but this is kind of all I have to work with. I guess I could just say they were different flavors of the same recipe. It really felt like that, too.

I don't know if you noticed, but there was both a kids' and adults costume contest. Well, Other Half and I entered the adults one: me in my Barbarian and him in Predator's Day Off.

I got third! Not bad out of 23 entrants!

The kids entered their costume contest too, which was luckily on the Sunday so they were both there. Younger Spawn will be joining us for both days next time. I think Regina might have been a bit overwhelming for her so she was leery of doing both days here. They were in Freddie Mercury and She-Ra, and Elder Spawn actually took the Grand Prize!

All the kids did get a little prize as well, which was pretty cool. I had the Super Proud Parent moment seeing them up there. And they had an awesome time this weekend, too, which makes it a huge win all around. 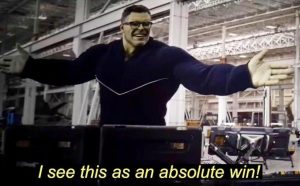 Okay, let's get to some pictures!

They had a D&D table running quick scenarios. This was me and Other Half's characters (Elder Spawn just wanted to watch). Thanks to some unorthodox thinking, we made it through!

Our bin of costume stuff. There was also two bags and that doesn't include our clothes. Seven costumes in all.

I kept getting great in-character shots of Elder Spawn

Playing Catan. Fellow in the back was running the D&D table

Ended up talking to this kid and his dad for a while. The helmet was playing music! Awesome job, bro!

Other Half as Endgame Thor

Book reading with Nyco Rudolph and Beatrice the Bear

I think this is the only shot I got without the jacket. 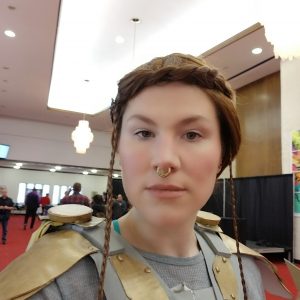 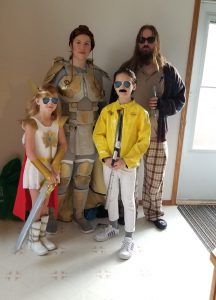 Our Con loot will be coming as a separate post, just because this one's already pretty big!

So there it is! Bran-Con has come and gone. I was hoping to have this out a little sooner but of course the Internet had to be dodgy when I'm trying to work. Now that things seem to be back to normal, I'm thrilled to finally be able to share this all with you! It was a lot of hard work to get here, but it was worth it! Onward to Bran-Con 2020! We will be the first in line!