The last time we talked I'd assembled the pieces of the sword and now had to do details and clean up some rough edges. So, the whole hilt, minus the grip itself, was done over with Crayola Model Magic clay: 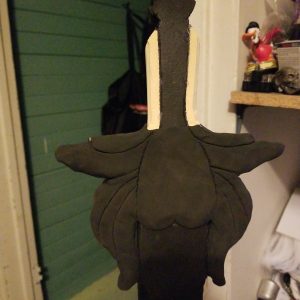 I ended up having to put a couple of extra pieces of foam on the grip itself because like a numpty I forgot to put in the dowel that I was so concerned about forgetting when gluing the two pieces together. So, I kind of missed out on that strengthening piece but it seems to be okay.

It also got numerous layers of Mod Podge and a hit of primer. I might have to give it a second coat, I had some unfortunate bubbles that are gonna need to be sanded out. It's weird, I don't usually have an issue but I guess I just got unlucky this time.

I tried really hard NOT to be in the picture.

I also painted the chest burst and shoulders and added the gem. The chest starburst attaches with velcro to the suit and the yellow belt, in case Younger Spawn wants to take it off and use the suit for dance later. 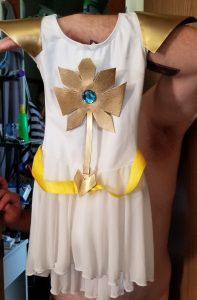 So we just need to do boots and bracers and paint the sword, and She-Ra is done!

I know this one is already done, but I don't know if I showed everyone the finished microphone. It was a little kids karaoke mic and stand and it was bright blue. A little tape and paint, and voila! Easy, peasy, lemon-squeezy (or so my kids say).

I've been doing a lot of work on this one. This is where I'm at as of last night.

Belt, bracer, and armbands have all been made. I need a couple of straps to attach the last two, but those are pretty much ready to go. As you can see, the knife sheaths have been attached to the belt, which clips right on to the rest of the armor. Because of the knives, I'm not sure about making the hip plates. If that turns out to be the case, then all I have left is the leg armor!

Oh, and a couple of pics with the wig on, because I had to see how everything looked together. 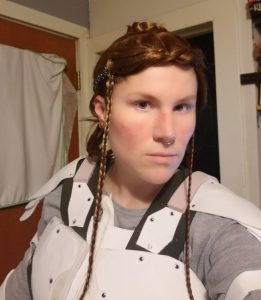 The only thing missing from these pics is the cape. Which looks more or less like this right now. 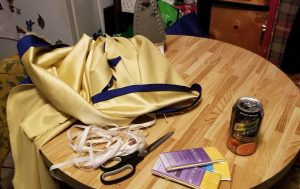 Except not on the table.

So, I was finishing the edges with bias tape, and it was looking really cool. Then I ran just short of my iron-on adhesive. Like, infuriatingly just short. And I can't get it where I live so I can't finish it until we go to the city next (which should be Wednesday, incidentally). So the cape won't be done until that happens.

Oh, and see the little round attachments on the belt? Clear, fillable, ornaments. Paint the inside, and add to your project. A great little tip I found.

In addition to a bunch of neat ribbon and one very hideously awesome belt, my sister passed along a jacket to me that she'd acquired from somewhere. My inner nerd says Castiel, my inner child says Inspector Gadget. It's also a very nice, very comfy jacket. 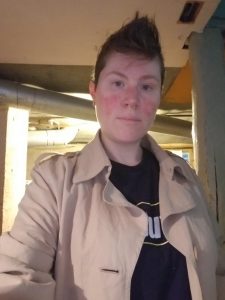 Speaking of jackets, after pulling out my bustier that I wore under my Barbarian armor, I had an idea. Threw that over my leather jacket (talk about broiling, and I was in the basement!), grabbed the mask I had left over from when Elder Spawn did the same character as well as his snazzy, new fingerless gloves and boom! Winter Solider. 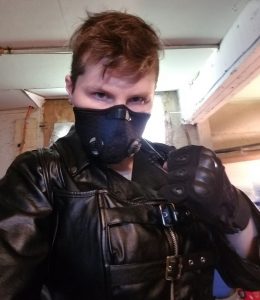 I wasn't thinking of it, but I should've thrown on my Loki wig, too. Oh, well.

So, that's the progress. We just might get this done yet!