Guys, when was the last time I wrote a post? Okay, I can look that up easily enough but I think we can all agree it's been too long. Mostly because I've been working my butt off in available moments on cosplay. It's exactly 2 months now (2 months from TODAY is Day One of Bran-Con!) and I'm starting to feel the con-crunch. That might seem a little premature, but between a couple of intense weeks coming up at work (including hardcore training and then running a whole department to myself!) and school starting in a couple of weeks, I'm feeling the squeeze already. So here's a big ol' progress dump and lots of pictures.

You'll Have to Excuse the Lighting in Some of These Pictures Because: 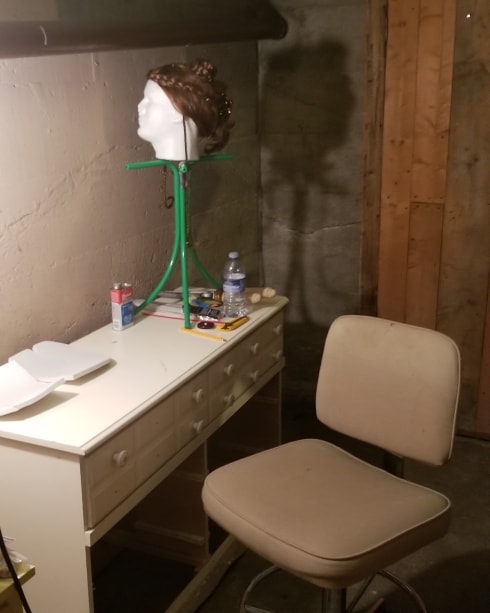 One of my projects on the go has been a real workshop area for myself. This meant cleaning out an unclaimed corner of the basement, sweeping and washing and sealing the floor (yay concrete!), and moving in my 'workbench'. Right now said bench is an old dresser minus all but two drawers but I have plans to spruce that up further. So please excuse the basement lighting in some of these pics. Maybe once I get a better lamp in my corner that will improve. I also have new tools! Specifically, a 1/4 sheet sander, a rotary tool/dremel, and a heat gun. All things I've been meaning to get for some time now, and it's nice to have more tools (literally!) at my disposal.

Last time I talked about wrapping my dagger handles and a first bit of paint. Here's the update so far:

Weathering via alternating brown and black shoe polish on my hands and then just handling them like they were being used. And a bit of silver on the ball on the end.

I also started sheaths for them. They're foam and real rough right now.

I also started my armor! Man, what a fight it was to start with! But, here's some progress shots:

This is what I started with. 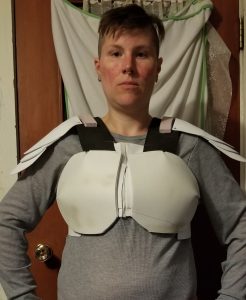 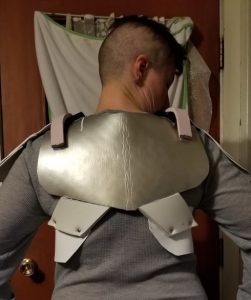 As you can see, it takes some time before the damn thing starts to look the way it's supposed to! I'm also glad I saved that unused back piece from the Barbarian armor, as it's now the base of the back here. You never know when old pieces will come in handy!

And one last thing before we move on: the cape! Because I wanted a super dramatic cape, because why not, I cut mine much longer and out of heavier material than the cape Valkyrie wears in Ragnarok or Endgame. Here it is cut out on the floor: 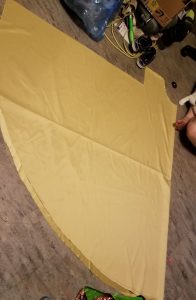 It hasn't been finished yet, and I haven't attached any fastenings (probably clips) to attach it to the armor yet. But it still looks pretty swanky even like this! And it'll probably just stay gold and not have the blue, and I'm quite okay with that. I do intend to trim it at least partly with blue, but we'll see how that works.

I don't have too many pics here, but we do have the blue robe, a grey under robe/skirt thing, and a little shoulder cape happening. It's starting to come together not too bad.

We also started on the staff. For the base we bought a bamboo stick that was in the seasonal stuff at Dollarama. It's light, cut real easy, and looks pretty good. Attached to that is part of a broken solar light to make the orb. It was something I found when cleaning out the corner that is now my work shop and it's works quite nicely. The wrapped bits are foam. It's a good start so far.

Lots of work happened here! In fact, today has been a She-Ra intense day for building.

First up is the cape. Here was the pattern for it, a bit different from mine:

Hopefully you can see the lines

You may have noticed I forgot the top seam allowance. Yeah, that was real good on my part. Luckily I had a large enough seam at the bottom to make it work. And that was an iron-on no-sew. I do have a sewing machine. It is, however, ancient and weighs about a thousand pounds, and it's been so long  since I used it I'm not sure I remember how to use it. Not that I was terribly good at using at anyway. So, we went with no-sew and it seems to have worked pretty well. It is also a double-folded hem, so the gnarly ends are folded in and unseen.

I added yellow ribbon to both the bodysuit and the shorts, and cut the skirt of the suit to better replicate the character's. Then we did the front starburst in craft foam (the thin kind) which attaches with velcro on the front and at the belt. I mod-podged this tonight in anticipation of painting it soon.

We also attached the shoulder-pieces, also foam, to the bodysuit. They have also been sealed. 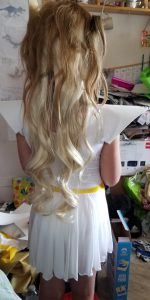 I also got a wig for the Younger Spawn, not that her hair isn't long enough, but She-Ra has so much of it that I just wanted to give her a little extra volume. It's a half-wig, and clips onto your head under the top layer of your hair. We just did it quick today, so it's a bit off. Color-wise they don't match right now, but I'll get a spray or something closer to the time to fix that. 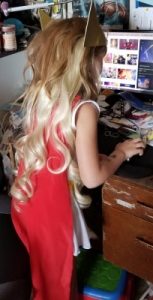 The big project for today was the sword! It's was pretty straightforward. I got a template for the hilt off Google and traced it out and onto the foam. Then I traced out the blade. Both of these were traced twice and after sanding the backs, were contact cemented together. Then, between the knife and the sander, I've been working on shaping the blade. I need to get some foam clay for the details and smooth out any spots that don't line up but it's a rather good start.

So there you have it! The crunch is on and we are motoring!