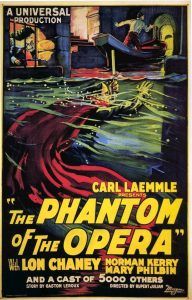 And we’re back again! Its November now, but why quit a good thing? This entry was a little more difficult, I ended up watching three different films for it. I’ll talk really quickly about the other two, but our main focus will be The Phantom of the Opera, starring Lon Chaney Sr., from 1925. This will be both the first with a ‘feature length’ runtime, and the first Hollywood film I’ve reviewed for this project. So let’s get to it!

First, a couple of quick words on the other two movies I watched. The first one was an adaptation of Edgar Allan Poe’s The Fall of the House of Usher from 1928. This was a short film at 13 minutes, and it was also super trippy (or avant-garde, as the article for it says). It was hard to discern the story when watching it, because you weren’t sure what was supposed to by symbolic and what was real. It did have a fascinating visual style with distortions of the screen from shooting through a prism, to M. C. Escher-esque set design, and no intertitles to explain what’s going on. It’s an absolutely fascinating film to watch, but I didn’t feel like I had enough to make a full review, so I tried something else.

The second movie I watched was a Swedish film called Körkarlen (The Phantom Carriage in English) from 1921. I was lucky enough to find a version with English captions translating the intertitles, so I thought I’d give it a try. And it was really good. I’d honestly recommend seeing it because I thought it was an excellently-made movie and has some really neat special effects. The acting was also great and at a couple of points I got kind of emotional. So why am I not reviewing this one fully? Well, watching it, it never really came off as a horror movie (even though it’s in my list of horror films for the decade). It has some supernatural/horror elements, but the story is honestly rather akin to A Christmas Carol or It’s a Wonderful Life and I kept waiting for the horror shoe to drop and it just never really did. On the plus side, it’s my second favorite version of this type of story (the first of course being The Muppet’s Christmas Carol). I just couldn’t review it as a horror film.

Finally, I sat down and watched The Phantom of the Opera and this is the one we’re going to talk about in depth. I watched the original 1925 version of the film rather than the 1929 re-edit. There is also a version with partial sound from 1930 (the film is lost but the sounds discs have survived). There was also seventeen minutes of colorized footage, but only part of that is still around. The version I watched was all in black and white and silent, which was fine. It would have been cool to see the color part that is still available, but other than novelty it really wouldn’t change things all that much.

The story of the Phantom pretty well-known in pop culture, so I don’t want to dwell too much on story. It is apparently quite faithful to the original novel (which I haven’t read but should), especially in its depiction of the Phantom’s appearance. 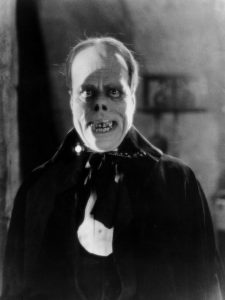 This appearance was created by star Lon Chaney Sr., who did his own makeup for roles, and was apparently kept secret until the film’s release at which time it scared the ever-loving crap out of people. And it’s effective. You can believe this guy was ostracized from society for appearance alone and that’s why he lives in the caverns under the opera house. For comparison, I had a look at some of the other Phantoms without their masks, and it was interesting. I don’t know why Gerard Butler’s Phantom is even bothering with the mask for that bad sunburn he’s got over his one eye; at least Robert Englund’s brought a bit of his Freddy look to it. Either way, Chaney’s Phantom is iconic, and part of that is his amazing makeup work. 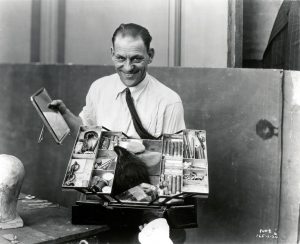 Let’s talk about the acting. I’ve come to enjoy the acting of these silent films, and I’m going to miss them since from here on out we’re going to be into ‘talkies’. Phantom was no exception to that. The pantomime, exaggerated style of the silent era is quite different from what I’m used to and I enjoy expressiveness. Again, Lon Chaney Sr.’s acting ability is every bit as impressive as his makeup skills, giving the Phantom a melancholy and gravitas that almost makes you feel for him despite his obsessive perusal of Christine and his willingness to do whatever necessary to get what he wants. Christine herself, played by Mary Philbin, is stuck in a difficult situation, yet is surprisingly resourceful in trying to help her lover Raoul (Norman Kerry) get her away from the Phantom. The rest of the cast is just as good, and indeed the cast itself is huge, with hundreds (maybe thousands) of extras giving life to Paris. The sheer number and quality of all those costumes is staggering, considering most of them are suits/gowns for wearing to the opera and costumes for the Bal Masque party scene. 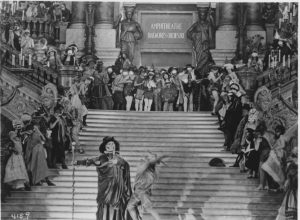 To that end, the sets are also amazing. The Paris Opera House in the film is a soundstage, which is crazy when you look at the size and complexity of that set alone. Even crazier? That soundstage wasn’t fully dissembled and demolished until 2014, at which time any remaining parts of the Opera House set were preserved and moved. 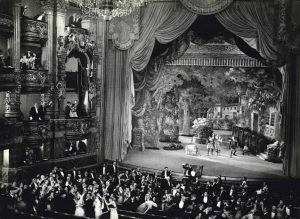 To be honest, I don’t even know what else to say about this movie. It’s excellent, go watch it. It would do it better justice than listen to me ramble on about it anymore.

So in conclusion, the 1920’s were an interesting decade for this project. I watched three movies, and thought highly enough of all of them to recommend. Whether you’re interested in the surreal, the dramatic, or the horror, I guess I have something for everyone this time. Thanks for coming around again and talking horror films and we’ll see you next time when we get into the advent of sound!

Watch The Fall of the House of Usher HERE

This entry was posted in Movies and TV and tagged 2017, horror, movie review, movies, reviews. Bookmark the permalink.