What Were They Thinking?: Actually, It’s Damn Stupid

Rarely here on What Were They Thinking? (the place where we take a look at the stupidest, most ill-advised things in all of comic book history) am I actually lost for words about a subject we cover. I've managed to find things to say about Marvel running rape storylines with both victim blaming and the victim falling for the rapist, Frank Miller turning Batman into a child abuser and the Elongated Man into a viagra salesman, and I managed to talk about The Widening Gyre. But this week, I'm exactly sure what I'm going to say, purely because the sheer level of "WHAT THE ACTUAL" is so far off the charts. And surprisingly, we aren't talking about Marvel. Nope, it is back to DC we turn for this week, as we take a look at Hemo-Goblin. 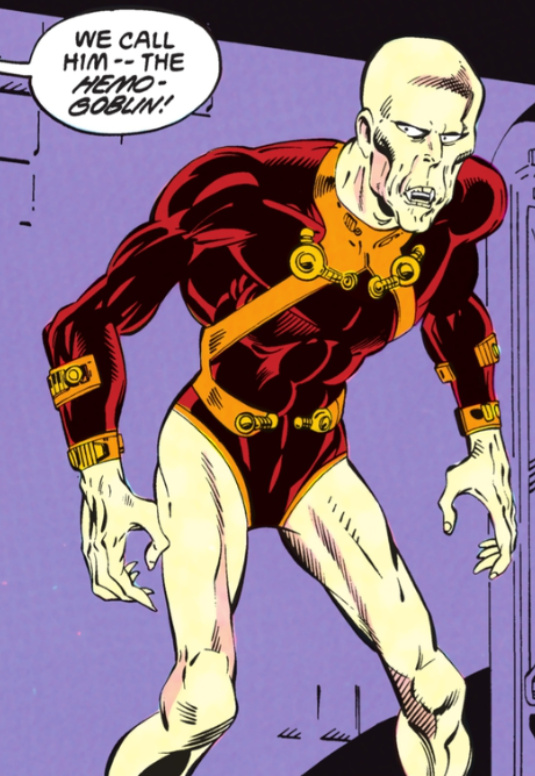 Why this has left me so speechless will become clear shortly, but we must of course set the scene. After the Millenium crossover event (you know, one of the millions that DC have done) of the late 80's, a spin off series was launched called The New Guardians. Basically, they took a load of people who were chosen by different cosmic entities and given superpowers and these guys were the guys who stopped the Manhunters in the crossover. Afterwards they decided to stay together as a team. The whole idea was that this team was meant to represent all of humanity and so featured people of all different races and nationalities. They got off to a great start during the Millenium event when one of their number turned out to be a bigot who promptly left the team for including non-white members. But that wasn't a bad idea, it was meant to lead on to something as this defector started his own group but the New Guardians series was cancelled before anything could happen, so that was just unfortunate. No, the really silly stuff started as soon as the series did. Hemo-Goblin appeared in Issue 1, but before we discuss him, I'd like to point out that the villain of Issue 2 got superpowers by snorting cocaine.

That is not how that works.

Right, Hemo-Goblin. In issue 1 of the New Guardians, which was released in September of 1988, the team came up against a group of white supremisists. In order to destroy this multi-cultural super-team, the white supremecisists created Hemo-Goblin, a Vampire whose bite would infect non-white people with AIDS.

Let me reiterate that. Hemo-Goblin was a vampire who infected anyone who wasn't caucasian with Acquired Immune Deficiency Syndrome.

I guess they were trying to be topical, playing off the conspiracy theory that AIDS was created by the US government to kill of black people, but come on, seriously? And the worst part is, that this was written by Steve Englehart, the guy who wrote the Avengers stories "Avengers/ Defenders War", "The Celestial Madonna" and "The Serpant Crown" (which was a good anti-racism story). He turned Patsy Walker into Hellcat, he killed off The Ancient One in Doctor Strange and when he worked on Batman he had one of the greatest runs in the history of comics, largely setting out much of the ambience that still carries over into every version of the caped crusader you can find, be it comics, film, TV or video games. But he'll always have on his CV that he created an AIDS Vampire. He created an AIDS Vampire, I'm sorry, I can't get over that. An AIDS Vampire that only bit minority groups. HOW WAS THIS GIVEN THE GREEN LIGHT? Did anyone at DC have a brain cell? Maybe they were all too preoccupied with all the utterly amazing stuff they put out that year, maybe? I mean, 1988 DC debuted Hellblazer, released Killing Joke, Death In The Family and V For Vendetta and started Grant Morrison's seminal run on Animal Man, so it was DC's Magnum Oppus year in many ways. The last 4 years of the 80's are probably the best in comic book history when it comes to DC and this was their best year. But still, THEY OKAYED A STORY WITH A RACISM AIDS VAMPIRE! THEY DID THAT! THEY THOUGHT THAT THAT IDEA WAS GOOD ENOUGH TO BE PUBLISHED! I'm gonna guess that they didn't have much faith in the new series and didn't think anyone would notice. But someone did.

Someone noticed that you okayed a vampire who gave AIDS to people of ethnic minorities, DC. We noticed and we won't forget.

Good thing you spent most of the 2000's giving me even worse material to cover isn't it. And I haven't even hit the big one yet either. But that's another story for another time.

4 Responses to What Were They Thinking?: Actually, It’s Damn Stupid