The List: Top 10 Best Performances In A Superhero TV Show

You know, hindsight is really annoying, serving only to remind you that you could have done something better if you'd have done it slightly differently. In hindsight, yes I should have separated this into Live-Action and Cartoon, as I did with the Best Superhero TV Shows. But I didn't, so we're just gonna have to deal with it at this point.

Anyway, I think we'll get on with the list shall we?

So, to kick off our list we have a classic performance from a classic TV show. The thing that the 60's Batman series did so well was how the portrayal of the villains fit perfectly with how they were written in the comics of the time. Meredith's Penguin is a prime example of this, giving us a live-action variation on the classic waddling, top hat wearing, umbrella carrying "gentleman of crime" with a squawk-like cackle. The character was the second villain introduced in the series (following Riddler and before even The Joker) and is tied for the most appearances by a villain in the series with the Clown Prince Of Crime, with the character becoming so popular that the producers kept scripts back in case Meredith became available to shot an episode.

It's got to count for something when you can take a character that even most comic fans think is a joke, play that character for 6 seasons (and counting plus guest appearances on other shows) and basically launch a new wave of superhero TV shows off the back of it, so credit to Amell there. His Arrow isn't the easiest to watch and there are times where he's more Batman than Green Arrow (and not just because he faces more of Bats rogues gallery than he does his own characters), but he plays his role very well. He can do ruthless, he can do tortured and distant (like he does in the 1st season, a lot), but the character grows each season and allows Amell to grow with the character.

Ok, so lets take a look at Jessica Jones- the character before we talk about Krysten Ritter's performance shall we. Jessica Jones is a character who has a very dark backstory, being manipulated and controlled against her will, being violated and tortured by a villain who controls minds and ending up left with a severe amount of mental trauma, yet still tries to help others whilst dealing with what happened to her. That is a character that, if played well, would undoubtedly get at least a nomination for a list like this. So, what about Krysten Ritter? Well, she plays Jessica Jones very well, she hits all of the aforementioned points perfectly. She's only had one season so far, but that season has accrued 19 award nominations and won 6, 3 of those going to Ritter herself for her performance.

And now for our first voice acting performance in an animated series. Now, teen Titans is a classic show, after all you guys voted it the 3rd best superhero cartoon of all time a couple of months ago. Now considering that, try to remember one voice or line of dialogue or scene from that show where someone is talking. I'm gonna guess it involved Raven, because she's easily the most memorable character in the show and that show contained Starfire and Beast Boy. Tara Strong is an amazing voice actor and her resume speaks for its self (especially if you were growing up in the late 90's early 2000's like myself, she did Batgirl in The New Batman Adventures, Dil in Rugrats, Bubbles in Powerpuff Girls, Timmy Turner in Fairly OddParents and Ben Tennyson from Ben10. Oh and she's Twilight Sparkle in MLP:FiM but that's by the by. And if we talk about her video game VA credits she was Harley Quinn in the Arkham series), but her most recognisable role has to be Raven. So, basically, you take everything I wrote about Burgess Meredith's Penguin and transpose it down here. The most iconic adversary from the most iconic live action superhero TV show, Romero appeared in the most episodes out of any villain and hit all of the 60's Joker notes perfectly. He obviously isn't as dangerous or psychotic as later Jokers, but neither was The Joker in the comics at the time, instead being a fairly harmless criminal clown with a penchant for practical jokes on a far larger scale than is reasonable. In a series known for its over-the-top camp, Romero stood out, making sure that The Joker was the most outrageous thing in any scene, because that's what The Joker has to be.

Now, if there's one thing that the Daredevil series is known for (apart from its amazing scripts, wonderful storytelling and great action) it is their anal attention to detail. A great example of this is Charlie Cox's performance, going as far as to take coaching on how to react to situations as if he were blind and training himself not to look at anything or anyone directly so as to ensure he portrayed the characters blindness as realistically as possible. Then you add in the duality of the character (the lawyer/ vigilante balance) and the religious aspects that play a decently sized role in the series, his performance adds so many layers to an already great character. 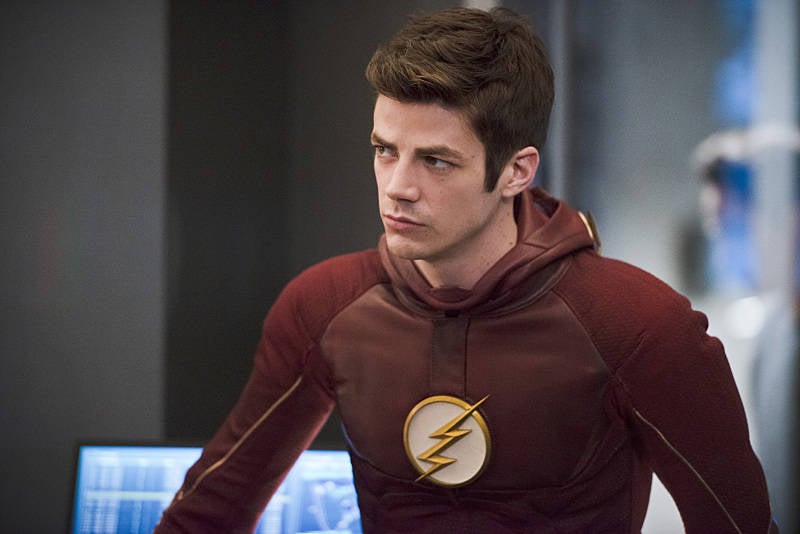 I'm sure Ezra Miller is going to do a great job in the DCEU and I'm almost certain he's going to be one of the highlights of Justice League, but lets be honest, he's never going to be The Flash is he. Not while this show is still running and Grant Gustin is still the lead. I could say so much about the show its self, but what about its lead? Well, what is there to say? Out of all the characters on this list, he's the most believable, the most relatable and the most fun to watch. He plays off his supporting cast in such a fantastic way and portrays all of the character's motivations and struggles so well that it's actually an insult that he wasn't considered for the films. Kinda good that he wasn't in all honesty, we wanna keep the Arrowverse as far away from the DCEU as possible, but still...

Ok, so here's the part where we really should have split the list into Live-Action and Animation, because our top 2 ran away with the poll by near double the amount of votes as 3rd place and both are from the DCAU, or to be specific; Batman: The Animated Series. Because as we all know Rule #1 of Comic Books is "Batman wins, LOL". Except this time, he actually doesn't. In fact, Batman only came second. And it isn't through fault of the actor. He's so good he played Batman in every single animation the Caped Crusader has featured in for near 15 years (and he's still playing him in animated movies and every single video game in the world). But he just couldn't overcome the force that is our number 1.

1. Did you expect someone else?

You know, I never even realised how type-cast Mark Hamill got when it came to animation. He's voiced Hobgoblin, Maximus, Klaw and The Trickster (who he's also played in Live-Action), all of whom have a certain thing in common, they have somewhat of a screw lose. But it all started with the role that stole our number one spot, which he won by a landslide. No-one has voiced The Joker more than mark Hamill. Hell, nobody has played The Joker more than Mark Hamill. It's got its own section on his Wikipedia page for God's sake. He's voiced the character in 8 different TV series, 4 movies and 8 video games, plus lending his voice to theme park rides and even, apparently, toys. At this point, I'm surprised that he's still most famous for Star Wars, he's been doing a whole lot more laughing than lightsabre duels over the years.

So that's our list. Do you agree or disagree? Anyone you think should be on the list that we left off? Let us know in the comments below.

3 Responses to The List: Top 10 Best Performances In A Superhero TV Show