Happy Halloween! In honor of my favorite holiday of the year, I thought I’d look at something in tune with the season. In gaming, there are a great many horror games, but even non-horror games can have scary or creepy moments. So let’s pay tribute to some of those today. Remember, I’m talking non-horror games, so no Resident Evil, no Silent Hill, no Dead Space, nothing like that. I’ve also left off Bioshock, as while not exclusively a horror game, has a lot of the same elements of one (man, getting down to Rapture and having a splicer scream and claw trying to get at you in your bathysphere… eep.). Some spoilers, too, as I can’t really talk about stuff that happens in-game without them. I’m not limiting myself to one per game, either, as some games have multiple instances of creepiness.

I had to go back and reacquaint myself with this one, as it’d been a while since I played the game. And I didn’t find it that scary. The headcrabs are creepy and unsettling for sure, but they’re like that throughout the game. I didn’t find that sticking them in a dark, abandoned town to really amp that up all that much for me. I know this is high on a lot of other lists, but this one didn’t really do it for me.

I’m pretty sure my reaction while playing these was well this is messed up. I loved Max Payne for it’s noir, comic-inspired vibe, and I thought that these sequences weren’t horribly out of place. I also didn’t really find them scary. When you’re in the headspace of the game, they fit. 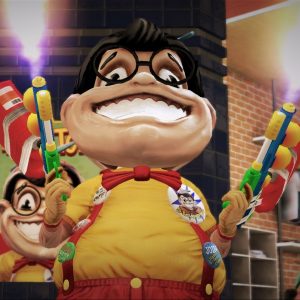 Now I know what you’re thinking, I said no horror games and then I include Dead Rising? Yes, while the game may have zombies and a pretty serious storyline, this game is more of a send-up of the genre than anything else. Claim to horror pretty much goes out the window when one of your buildable weapons is a teddy-bear sentry gun that spouts cheesy one-liners (not to mention the ‘Super Ultra Dead Rising 3' Arcade Remix Hyper Edition EX + α’  mode for the third game). Each game also has a number of mini-bosses, known as ‘psychopaths’. Some are gross, some are sad, and then there’s Slappy. From the moment he appears over your shoulder, to his final jump-scare before death, everything is made much, much creepier with that giant, grinning mascot head. While some psychopaths might be more disturbing when you stop and think about them, Slappy just hits that creepiness button as hard as he can. 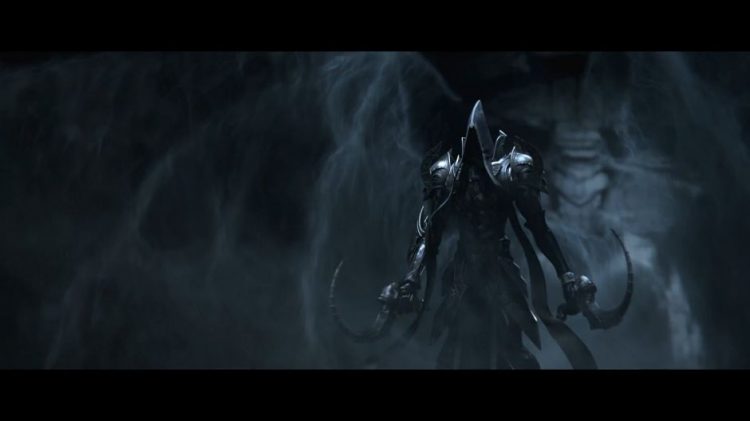 Let’s get this out of the way first: Diablo III is not scary the way the first two are. I love it, but it’s definitely more fantasy than horror. I first saw this cinematic as a trailer for the Reaper of Souls expansion, and it looked so good. After steamrolling through the game a couple of times with my Lady Barbarian, here was stuff getting real. You see the lank, almost skeletal figure float in, twin scythes in hand and hear Tyreal call him Maltheal, the Archangel of Wisdom. I like how he was creepier by not saying anything until the very end, a wraith that melts the Horadrim and tears away their souls for his own. Blizzard always has beautiful game cinematics, and this is no exception. 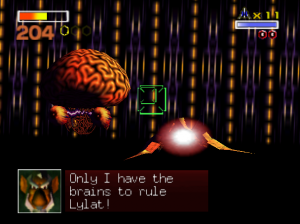 Here’s the scenario, you’re comfortably playing your rail shooter starring a team of fighter pilot animals and you get to the final boss. He’s a floating head and hands, and that’s nothing too scary. Upon defeating said head and hands he turns either into a terrifying robot skull or a freaking brain with eyeballs (depending on the path you took earlier in the game). Starfox 64 had really cool level bosses with some fun variation, but nothing as pants-crapping as what awaits you on Venom. 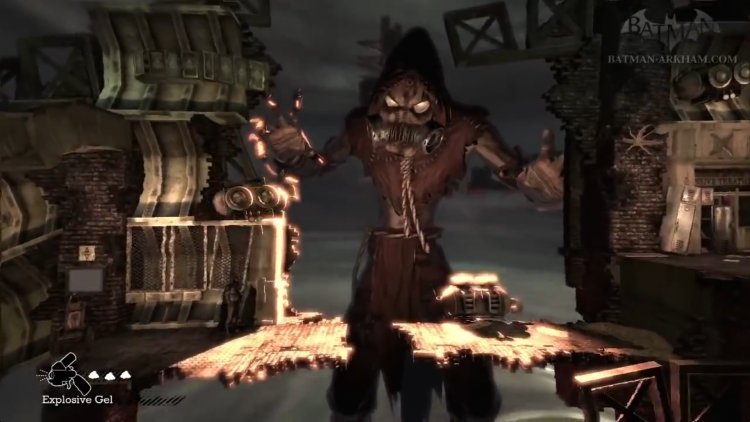 We all know the levels: imagery of Batman’s lost parents, evading a giant Scarecrow, and even recreating the opening sequence of the game with roles reversed. They’re unsettling, twisted visions in a dark, gritty game, giving you something a little different from endless goons to beat up. There’s not much to say here, they really speak for themselves.

Mass Effect 1: The first creepy thing you encounter is right near the beginning of the first game. Human corpses, impaled on large spikes, drop down covered in blue, glowing circuitry. Which proceed to charge you like a fast moving zombie. And that’s how you meet the Husks, which will show up throughout the series. 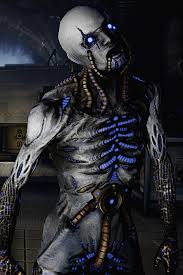 Mass Effect 2: Moving on, Overlord was a DLC for Mass Effect 2 in which you investigate a research base where they were working on a virtual intelligence. Relatively standard sci-fi fare, and so it was, until I was investigating a bunch of terminals. This face jumps out of the terminals with a loud, mechanical shriek. It shows up more than once, and though it never made me jump the way that first one did, I was thoroughly unsettled by it. It all ends with a revelation that’s both heartbreaking and horrifying that you cannot walk away from unscathed. Excellent addition for an excellent game. Honorable mention from the series also comes from the second game, with the reveal of what the Collectors are doing with the humans they capture, and the ‘Human-Reaper’ that is also rather unsettling (even if it does resemble an oversized Terminator).

Mass Effect 3: The third game brought in new enemies, the scariest of which is the Banshee. Similar to the Husk in that it is a blue-glowing corruption of a living creature, the Banshee is far smarter, stronger, and deadlier than its counterpart. Not only are they terrifying to look at, but their wheezing breath and chilling screams are the stuff of nightmares. I’ve seen less frightening creatures in horror games, and definitely ones less efficient at killing you. Needless to say, my first encounter with one did not go well. 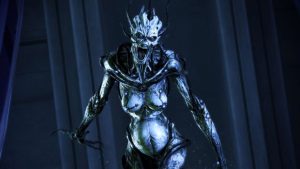 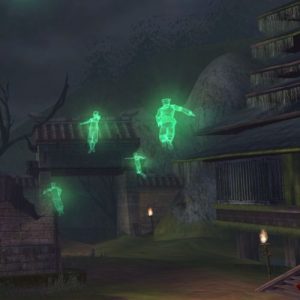 What could possibly go wrong investigating the remains of a town that was flooded when a dam was built? How about finding out that the people of the town may not have been given notice about the flooding? Plenty of ghosts float around the remains of the town giving it a quietly eerie feel, but nothing gets you quite like going into one ruined building and finding the ghosts of two children. An orphanage that had been locked when the flood came, drowning the children inside. Then you find the quarry, and the mine… and it’s not much better.

Another location in and around the town of Tien’s Landing is The Great Southern Forest. Within that forest is an inn, a fairly nondescript place, one of a thousand such inns in fantasy games. The people are a bit odd, but there’s a lot of weird stuff going on in the forest anyway. Until you find out the truth; they reveal themselves as twisted cannibals following a demon ‘Mother’ that you must then defeat. Great game overall though, and it'll hopefully get more love now that it's been ported to mobile. 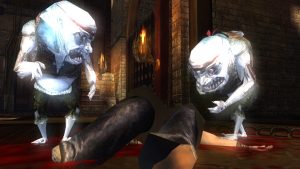 Dragon Age: Origins- Of all three games, the original has the most creepy moments. There’s the abandoned orphanage in the elven part of the capital city. Nice place, minus the demons and spirits who took up residence after a massacre there, and ghostly children’s voices. Then in the Deep Roads when you find the dwarf Hespith and what she has to say, which leads into your first encounter with a Broodmother (all of which hit harder for me the first time, playing as a female dwarf character). The DLC Golems of Amgarrak introduces new creatures in the Deep Roads like the Harvester, a twisted creature created by the dwarves long ago trying to recreate the work of another. 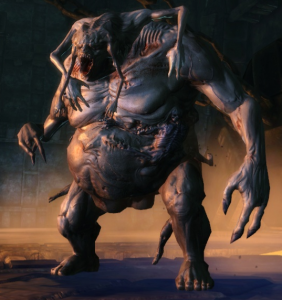 Dragon Age: Awakening- This expansion provides one scare that’s a bit sad, in the form of a ghoul that had been someone close to one of your companions.

Dragon Age II- There’s one particular mission in this game that plays out just like a horror movie. It involves a suspected serial killer, a lair in the sewers, and your mother. There’s some definite suspense and creepiness through the whole thing. 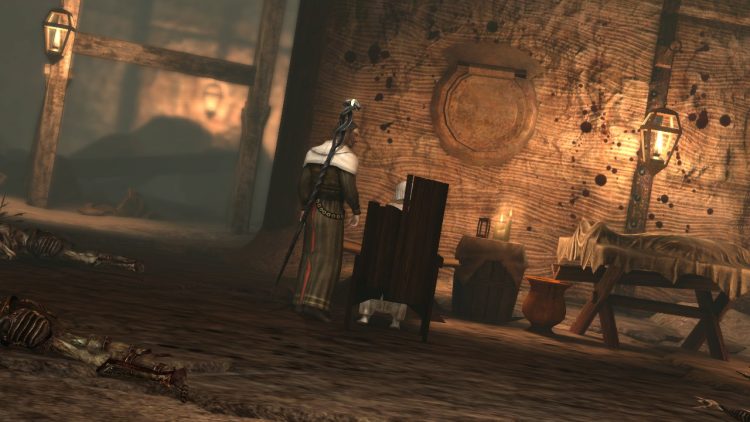 It all goes downhill from here... 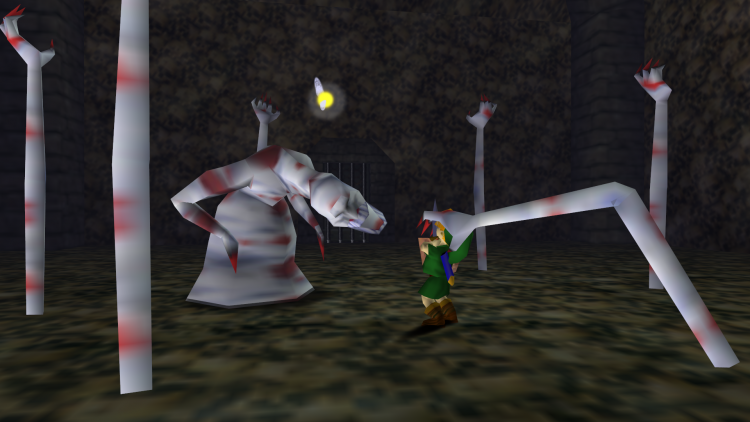 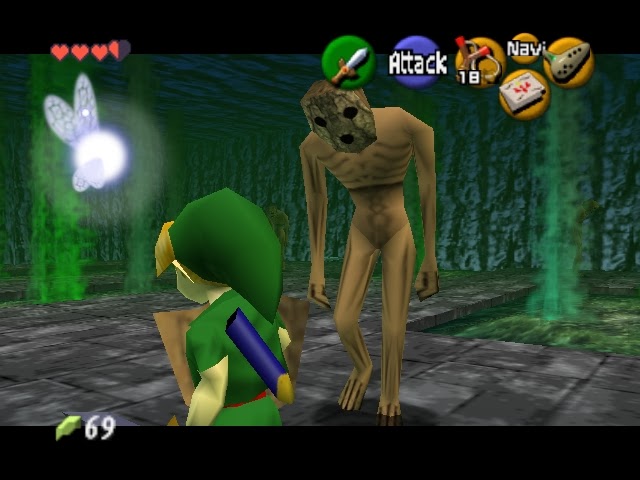 To round it out, let’s talk Fallout. Let’s talk about a Deathclaw in the first hour of gameplay. Or another lurking around above you as you make your way through the basement of the Museum of Witchcraft. Not a deathclaw, but equally terrifying is Swan, who I ran into by accident and ended up in a desperate fight with. But what really gets me are the mannequins. They are everywhere, sometimes alone, sometimes in groups, and always creepy. I have accidently shot more of the damn things thinking they were enemies than I care to admit. 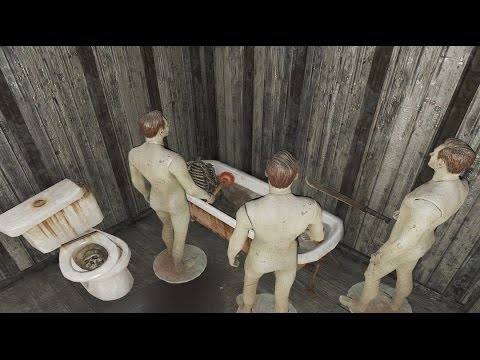 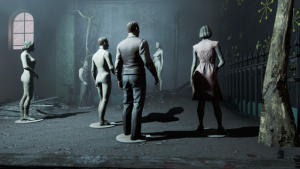 Let’s not even talk about the monkeys (those I shoot on principle). 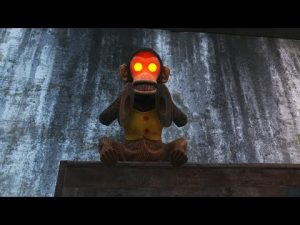 Have a great Halloween everyone!

This entry was posted in Fantasy & Sci-fi, Lists and tagged Halloween, video games. Bookmark the permalink.