Posted on September 25, 2016 by Kaldath | Comments Off on Anime Talk: Review of “Orange” 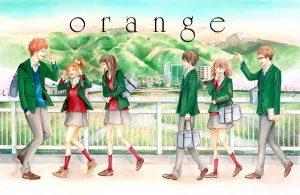 Hello folk, on this edition of Anime Talk I am going to as the title says; review the Anime Series Orange. Warning there may be some spoilers but I will try to limit them as much as possible.

Orange is a .... I am not sure exactly how to describe it ... It is a romance slice of life anime, but there is an aspect of Supernatural or Super Science to it also which I will explain. You see Orange is about a group of five friends who receive letters from themselves sent from 10 years in the future. These letters instruct them to keep an eye on a new transfer student that will die in an accident and to change the future because they regret not being able to do so themselves.

So now for the good and the bad of this anime. The Good: First and foremost is the characters. this group of friends are all incredibly believable and likeable. You get emotionally invested in them and their goals , especially the main protagonist Naho and her budding romance with the transfer student Kakeru. Speaking of emotional investment! The story of this anime is an emotional rollercoaster. I just finished watching the last episode moments ago and I still feel like crying! Honestly not to spoil the ending for you all but if you are an emotional type I suggest you keep a box of tissues nearby when watching Orange as you will need it many many times before getting to the end of the 13 episodes.

Now on to the bad. The only thing I personally can say is bad about this anime is the art style. Don't get me wrong this anime is well drawn however the style used by the artist is not to my tastes. I have been know to give up on perfectly good anime ( story wise ) because I could wrap my head around the art style being employed. fortunately for me this one did not rise to that level though if the story wasn't so good I might have dropped it because of the art. That however is really the only negative I have to say about Orange.

This is a very VERY good anime and I would recommend watching it, this was seriously the highlight of the Summer 2016 Anime season and is honestly my candidate for best anime of the year thus far with just the winter 2016/2017 season left for new shows. I intend to watch this show again and I am not usually one for "reruns" but I need to marathon this series one day very soon, but one where I don't have to go anywhere because just tugs at the heart strings and wrenches your heart!