Hey everyone, Melmo44 here. I’d been debating what to do, subject-wise, for my first post, when a surprise showed up in the mail on Monday.

And, that pretty much made my decision for me. It’s no secret that I’m a huge fan of the band, even going so far as to use them as inspiration here on Hero Machine more than once. For anyone not familiar, Sabaton is a Swedish power-metal band whose lyrical content is based on military history. They tend to gravitate toward the two world wars, but also dedicated an entire album to the Swedish Empire (Carolus Rex) and another to songs reflecting the ideas of Sun Tzu (The Art of War). As the title implies, The Last Stand is an album detailing various last stands and last ditch efforts throughout the history of war. So with that, let’s see what we have. Do bear in mind during this review that I don’t really have knowledge about the technical aspects of music so I’m looking at this from an aesthetic perspective; how it sounds and how it makes you feel when you listen to it.

The first thing I noticed was that this album has a lot of diversity in subject matter. There are two songs, Last Dying Breath and The Lost Battalion which are taken from the First World War. The latter of which is preceded by the ominous spoken Diary of an Unknown Soldier, which features Iced Earth’s Jon Schaffer providing the narration. For WWII, there is only one entry, The Last Battle. The rest of the songs cross a large range of time and settings, from the opener, arguably one of the most famous last stands in history (Sparta), to the Anglo-Zulu War (Rorke’s Drift), the end of the samurai (Shiroyama), and the Soviet-Afghan War (Hill 3234). It was refreshing to see the band tackle subjects from outside their usual repertoire and go further into history.

The second thing I noticed was how diverse the songs themselves are. As far as Sabaton goes, I’ve never had the problem of their songs all running together and sounding the same. So it was nice to see that trend continued. While there is the common thread of the theme running through the songs, each one is very distinct and individual in sound. And somehow, it all works. I don’t ever find the song transitions to be jarring, despite the disparate tones. There was, however, one overarching element that the songs had, and it was something pretty much absent from their last album: keyboards. I’m talking big, snyth-y, out-in-front keyboards. There’s the big, 80’s vibe on The Last Battle, the decidedly Deep Purplish feel of Blood of Bannockburn, to the dark drum/synth combination of Lost Battalion that reminds me a lot of something like Judas Priest’s Blood Red Skies. It might not be to everyone’s taste, but I was glad to see it back.

There is one final thing I want to touch on before giving my final verdict. Now generally Sabaton will include a cover or two at the end of their albums (or at least most versions), and they are generally really excellently done. They tend to follow Sabaton’s ‘theme’, such In the Army Now, For Whom the Bell Tolls, or Twilight of the Thunder God. My version came with two covers: Camouflage, originally by Stan Ridgway, and All Guns Blazing, originally by Judas Priest. I’d not heard Camouflage before, and we listened to the original after to see how the two compared. Between this and In the Army Now, it amazes me how Sabaton takes these New Wave (anti-)war songs and injects them with so much life and  energy. Nothing against the originals, but there’s so much more power in these covers. Now obviously, I was already familiar with All Guns Blazing, being a song from the album Painkiller (fun fact: it has the record for longest and most consistent play time in my car of any album ever). And this cover… the only way I can describe it is to say it’s the absolute weirdest and most amazing thing ever. One part of that is guitarist Thobbe Englund’s distorted co-vocals beside frontman Joakim Broden’s deep, powerful voice. It’s not going to be to everyone’s taste and I can understand that, but I thought it was so cool.

So in conclusion, what do I think of The Last Stand? In a word: superb. Big, powerful songs that are ridiculously catchy and fire you up when you listen to them. Honestly. Listen to Winged Hussars and tell me you don’t feel amazing afterward. It doesn’t unseat my favorite Sabaton album (Carolus Rex), but it’s pretty much on par. And not only that, but these are real events, you learn something listening to this. Metal that teaches you history? That’s pretty much perfect in my book. 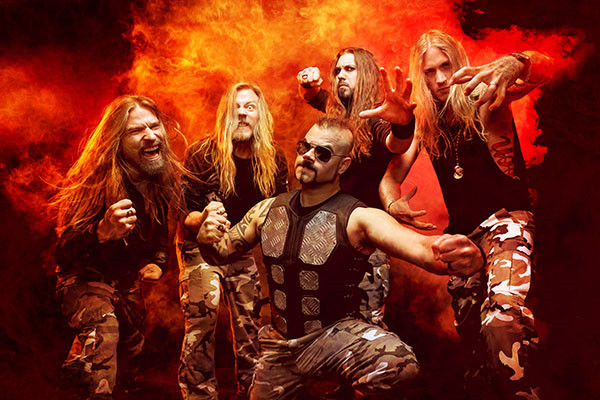 This entry was posted in Things I Like and tagged metal, music, reviews. Bookmark the permalink.