The List: 5 Things The Star Wars Prequels Did Right

We all know the Star Wars Prequels. Three of the best films ever made, with excellent dialogue, a fantastic dynamic between it two romantic leads and no-one has anything bad to say about them. Well, that would be the case if we lived in Bizarro world, but unfortunately we don't, so what we instead got was a confused mess with an awfully wooden lead, stereotypical and racist characters that annoyed everyone and midiclorians. But that's not to say the films were all bad, all three films had definite good parts. And I've managed to cobble together a list out of them. I'm only doing 5 this time, because a lot of the good bits I've found can fit under certain banners, so rather than stretching the list out to make 10 or so, let's just go with 5.

Warning: Opinions ahead. Don't let them get you angry, anger leads to the dark side.

With the prequels expanding the number of lightsabre wielders, the ante had to be upped on how they were used. And they did just that. Obviously neither David Prowse nor Alec Guinness were exactly the most agile or mobile of men during the original trilogy and Mark Hamill had to work to the pace of a man who couldn't turn his head to see where he was swinging, so obviously the duels from the prequels look much more intense than their predecessors. Of course, not all of them are great, the battle between Yoda and Dooku is just an effects showcase  and Yoda vs. Palpatine looses its tension very quickly because you already know the outcome, but then you have the battle with Darth Maul (which is still probably the best in the series) and the battle on Mustafar, which is the most intense duel in the series, even if the lightsabre swinging bit is apocalyptically stupid.

I love John Williams. Everything he did on Star Wars was great. As with all great movie composers, he knows how to milk every single emotion out of a scene, no matter how much the dialogue or the actors ruin it. And his storytelling with the music is phenomenal as well. If you listen to the soundtracks, the first film is mostly new themes, there are very few call backs to the music of the original triology (maybe a few in some of the Tattooine scores). However once we get to episode 3, you have call backs to episodes 4-6 alongside themes carried over from the previous films, mixtures of Luke's theme alongside Anakin's in the Battle of the Heroes theme that plays during the final confrontation on Mustafar, the classic themes from A New Hope and Empire Strikes Back during the Jedi temple attack, it brings the series full circle before the final scenes. 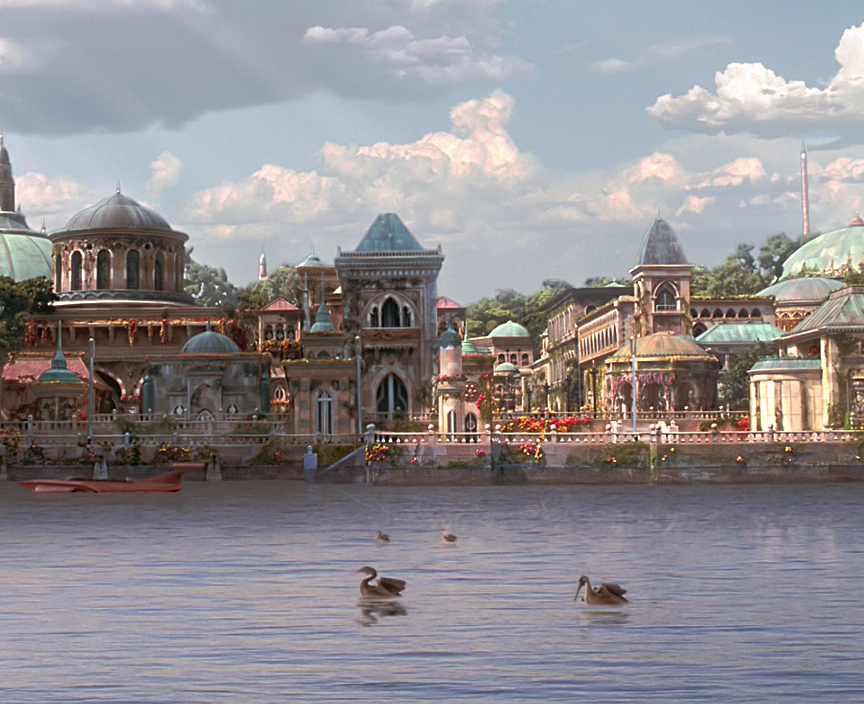 This covers a lot of stuff, so bear with me. What I'm talking about here is the costume design, the prop design, the set design and the special effects. Say what you like about George Lucas' reliance on sfx in these films (and he does rely on them too much) but the worlds he is able to create with them are stunning. Whether you've got the classical/ renaissance mixture of Naboo or the futuristic cityscape of Coruscant. You have things like the lightsabre designs, each being individually tailored to the Jedi, backing up the idea that each character built their own weapon. Plus you had Count Dooku's lightsabre, which was bad-ass. And of course, the costume design. As ridiculous as some of Padme's episode 1 costumes were, you can't say they weren't impressive to behold. Costuming was used to tell you everything you needed to know about a place, not just a person, which is a brilliant and effective way of doing it, from the opulent costumes of Coruscant, to the humble rags of Tattooine.

Yes, Hayden Christensen was more wooden than a tree and had the emotion capabilities of said tree, but if you look at some of the other casting, they held together the script (if it can be called that in some places). Liam Neeson gave gravitas and importance to some of the silliest dialogue in the series, Christopher Lee put in his usual excellent performance as the haughty, treacherous count despite being woefully underutilised and Samuel L. Jackson was the guy who made you believe that these robe wearing monks could actually be the guardians of peace in the galaxy if required, even before he's stood up from his chair in the Jedi Council chamber. But the real stand-outs here belong to Ewan Mcgregor and Ian McDiarmid. Mcgregor perfectly captures Alec Guinness in his portrayal of the younger Obi-Wan and becomes a far more effective emotional core to the series than Christensen. He goes from an impulsive student through smart, droll teacher to wise master and brings each of these roles to life. He adds so many layers to an already beloved character and make that character his own. And then we have McDiarmid. Easily the best actor in the trilogy, his role as the seemingly benign but inwardly scheming Senator/ Chancellor/ Emperor is wonderful, like Mcgregor, capturing every instant perfectly, delivering dialogue that would otherwise be stupid and making it sound like Shakespeare. And by the time episode 3 comes around and he can really cut loose with the manipulative side of the character, giving one of the finest Star Wars scenes with his Darth Plagueis speech, and then cut loose altogether as the Emperor, he is wonderful and a magnetic presence on the screen. 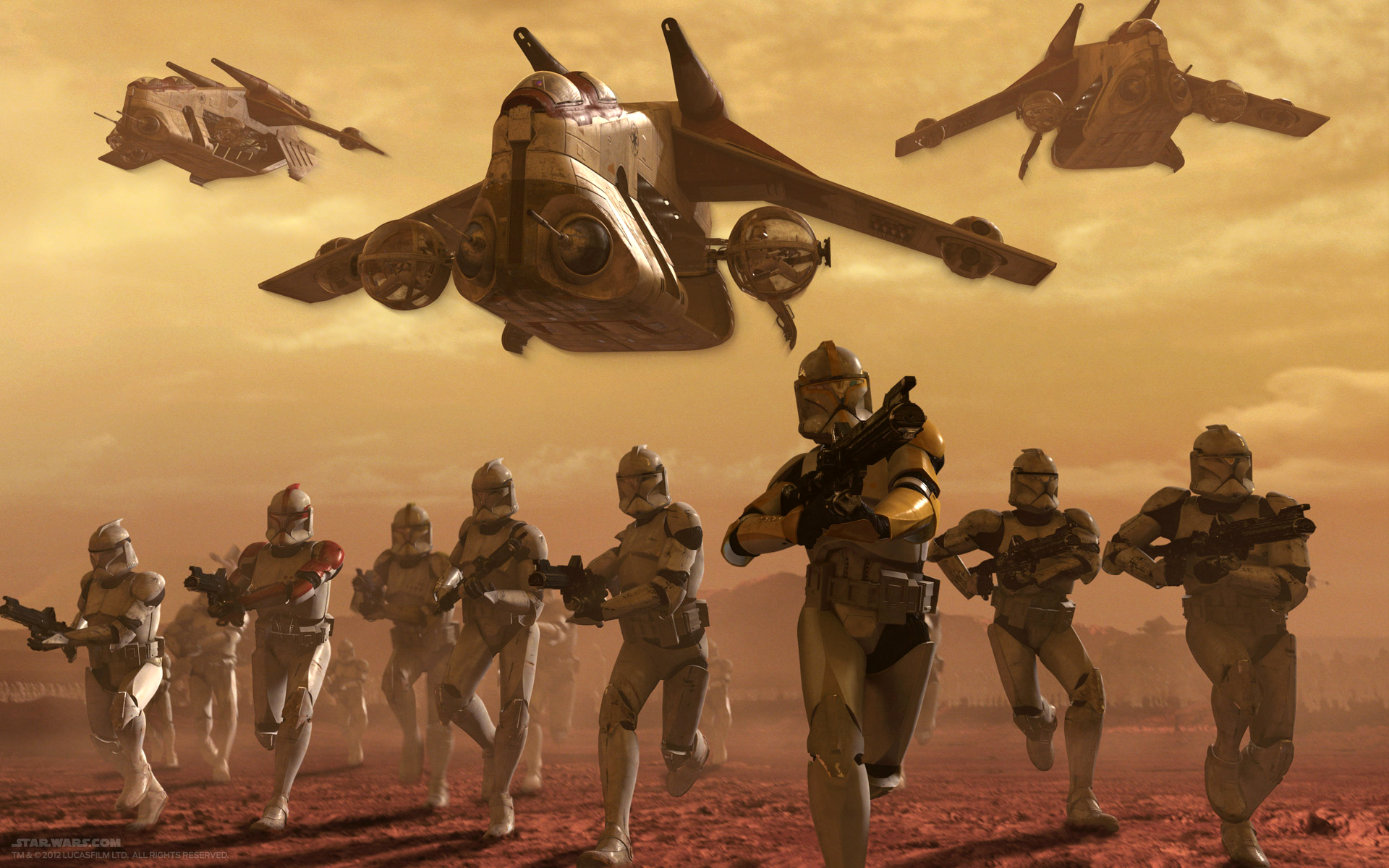 The entire point of the prequel trilogy was to give some backstory to the events of the original 3 films. In that regard, it succeeded, despite the execution. It elaborates on all the major points that it needed to, such as how Anakin Skywalker became Darth Vadar and how The Emperor came to power, and it also took some throw-away lines of dialogue and expanded on their importance (see The Clone Wars). It showed us how the Storm Troopers came to be and the genesis for some of the most recognisable parts of the original trilogy, such as the Star Destroyers. The deleted scenes from the third movie give us the beginnings of the Rebel Alliance, which probably should have been left in even if it did slow the pace down. It also added a large amount to the mythos of the Force and those who use it, being the introduction of midichlorians, the establishment of the Jedi Order, it's rules, the training system and their role as protectors of the peace in the Old Republic, as well as film canon confirmation of the Sith and the rule of two. New planets and alien species were added and old ones given further spotlight (i.e. we get to see the Wookie homeworld). The prequels may be fairly maligned but all of this stuff originated from those films and are now basically gospel, whether you look at the books, comics, cartoons, video games, whatever. And we have to give them credit for that.

So do you agree with my list. Feel free to leave your negative opinions of the Star Wars prequels in the comments below.

12 Responses to The List: 5 Things The Star Wars Prequels Did Right