Every good superhero needs a good origin story. Batman's parents where killed in front of him, so he decides to fight crime in his city. Captain America isn't able to join the US military to fight in WW2 so volunteers for an experiment to turn him into a super-soldier and goes on to fight for truth, justice and the American way. And Thor fights crime because...

Well you can't have them all.

But some superhero origins just can't avoid being bad. The original Flash gets his powers by inhaling "hard water vapours" (isn't hard water basically ice?) and the original Human Torch is actually a robot (negating the Human part of his name). And the less said about how half of the Fantastic Four shouldn't have actually been anywhere near that spaceship (one being unqualified and the other still being in college) the better. But there are some that are just plain terrible. And here's 5 of them.

So, we start off with one that is all kinds of "well, that's dumb". So, Richard Grey Jr. here was the only survivor of an archeological expedition his parents took whilst he was just an infant. With his parents killed by bandits, the baby Richiard was found and raised by a condor. So far so Tarzan rip off. However, our Richard decides to completely ignore all laws of nature and learns to fly by copying the wing movements of the condors who raised him. *nods* Yup. That's how that works ladies and gentlemen. Just flap your arms like a bird flaps its wings and you too can soar like and eagle. What do you mean you tried that as a child and it never worked. You obviously weren't trying hard enough. 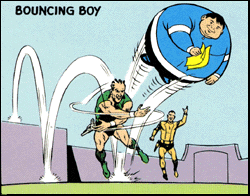 I know we have a few members of the Legion Of Fanboys in our ranks, but even you guys have got to admit, the original origin story for Chuck Taine was terrible. Fat kid is given super secret formula to deliver, stuff happens, fat kid drinks super secret formula because reasons (he some how ends up thinking it's a soft drink for some reason) and then fat kid gains the superpower of fat jokes by being able to bounce. So basically fat kid gets the munchies and then bounces. Anyone else see the problem here? Well, at least he wasn't Matter-Eater Lad.

Oh look, it's Chuck Taine's origin story gone mad. So, Fatman here (or to give him his full government name, Fatman the Human Flying Saucer, because that is a name to inspire people), is a rich guy, who is on the larger end of the size spectrum. He sees this UFO in trouble and rather than calling the media or NASA or the army, he goes to see what's up on his own. He helps the spacecraft, which turns out to be a shapeshifting alien and said alien gives him a chocolate milkshake that allows our aforementioned rotund gentleman to morph into the form of a UFO whenever he pleases. Yes, you read that right, a milkshake. Because a super-secret formula actually made sense, even if it being mistaken for a soda by its delivery boy didn't.

So, you get bitten by a cobra right. What is the first thing you do? Is it a) Seek medical attention and find an antidote, b) try to suck the poison out or c) die?

If you answered yes to any of the above, NO! You're doing it wrong! What you actually do is inject yourself with the blood of a mongoose! Yes ladies and gentlemen, you heard me right, a mongoose. Not only will that cleanse your system of the cobra venom, but it will also grant you superhuman speed. Why bother with antidotes and proven science when you can get a blood transfusion from an animal of a completely different species. 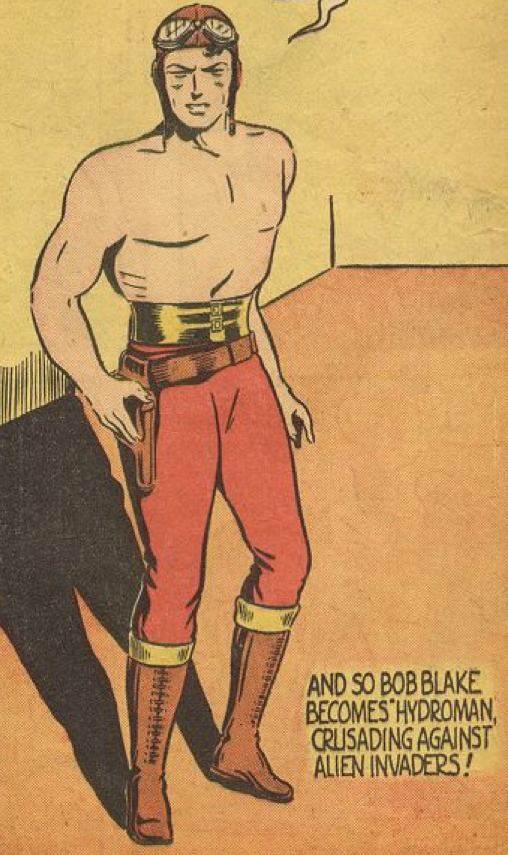 I have to thank MadJack for bringing this one to my attention in last weeks CDC, because without a doubt it has to be possibly the stupidest superhero origin story ever.

So, this scientist creates formula that will reduce the human body to water. Don't know why you would want to do that, it doesn't seem to have any potential real world uses and the only people who might find it useful are really over the top supervillains in need of an elaborate slow and painful death for their arch-nemeses to escape from, but I digress. Said scientist then carelessly spills this incredibly dangerous formula on his best friend, who promptly turns into a puddle. That's manslaughter. This scientist should now be in prison, probably for the rest of his life for thinking that such a concoction was a good idea in the first place. But never fear. Our scientist then creates an antidote to being turned into water and brings his friend back to life. Firstly, WHAT?! This guy just created a way to turn liquid water into human flesh, blood and conscious thought. How? Never mind the chemical impracticality of it all, why was this not the formula he was trying to make in the first place? It's certainly more useful than liquidating people in the most literal sense possible. And secondly, what does the friend who spent a brief amount of time wondering if a glass with him in it was half full or half empty do to the scientist? Does he punch him in the face? Does he sue him for endangerment of life? Does he report this dangerous mad scientist to the authorities? NO! Because that would be sensible! Instead what he does is he decides to become a superhero, because the antidote didn't work properly and he can now shift between human and liquid form. And because this is the 1940's he promptly engages in battles against the Japanese and Germans. I'd have thought that maybe using the human to water formula would be more useful in defeating someone in a war if you just dropped it on your enemies troops, or does that go against too many Geneva conventions? Either way, for the sheer stupidity of it, I have to give this the number one spot for the worst superhero origin story ever.

This entry was posted in Lists, Super-Hero Stuff. Bookmark the permalink.