Character Of The Week: Vampyrist- Effigy

I originally wasn't planning to do a COTW this week, I figured most people would be too busy with festive pursuits to have time to spare, especially considering its Friday. However, it would seem Vampyrist has other ideas. I nip on to the forums for a quick look, to see if anything has been posted whilst I was having my dinner and this is what I was greeted with. 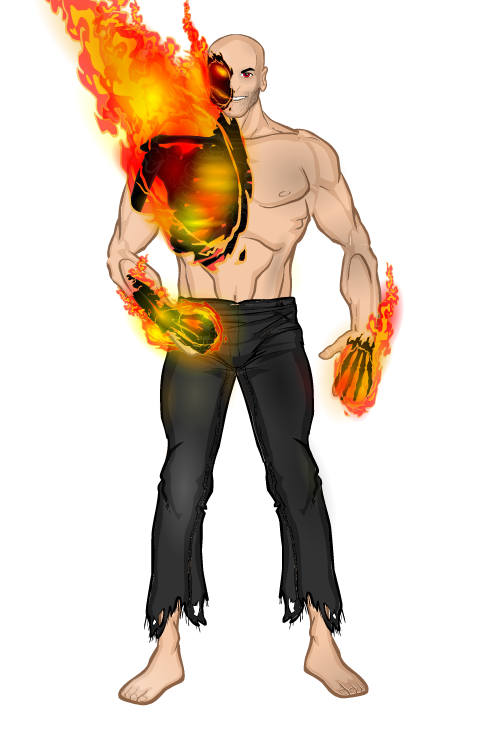 Vampyrist is one of those classic 'machiners (not a term I tend to throw around lightly) who have a style that is truly their own, much like AMS or dblade, you can try and copy it as much as you like, but you'll never get it exactly right, it will never look as good as what he does. And this is as fine an example of the breed as I have ever seen.

If we just set the obvious aside for the moment, we'll kick off with something that has always impressed me about Vampyrist's work. He always seems to do very minimal shading at first glance, you notice a few sports of highlighting on the pants, the glow from the flames that is reflected off the leg, and you don't really think too much more of it. Then you look again and you notice the very subtle shadowing on the left foot, then the chin and the stomach and then the arm and chest. His subtlety with shading on his characters always gets me. It shows you don't have to use masses upon masses of light and shadow to get the result.

And now that that's out of the way, we can move on to the obvious. Masking the skeleton onto the flame effect (*wheels out COTW slogan board*)- simple but so effective. Now this is where you use masses and masses of light and shadow to get the result. I'm not even going to bother trying to count the layers of colour here, it would be pointless, but you have to give Vamp massive props for how good this looks. The fire looks so real and alive, you can feel the heat, and the black, almost charcoal look, of the bones in the flames contrasts so wonderfully against the vivid colour engulfing them. Best examples, just look at the right hand. And that right eye looks positively evil (as I'm sure was the intent). If people are still umping and erring over what to nominate for the Hall Of Fame (nominations are still open btw), you could do a lot worse than to nominate this.

Note: Obviously there won't be a COTW next week, I doubt much will be popping up on the forums next week and anyway, I'll be too busy to write it. Though you can of course expect a review of the Doctor Who Christmas Special on Thursday.

6 Responses to Character Of The Week: Vampyrist- Effigy