Character Of The Week: Candruth- Portrait of a Blue Eyed Woman

I fear I would be neglecting my duty if I didn't showcase this picture for this weeks COTW, even though it was originally posted last friday, just before the last COTW went up. But, technically, I pre-schedule these posts the day before, so I couldn't have featured it last week, so I can feature it this week. So for those of you who missed it, here's Candruth's latest piece of Art. 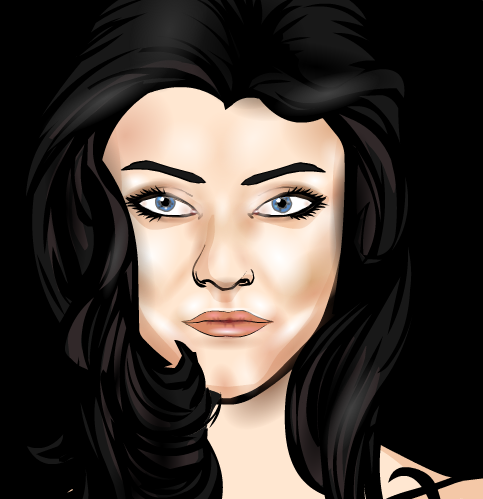 Anyone remember that amazing portrait SeanDavidRoss did for the faces contest a couple of years back? It's in the Hall of Fame, so if you don't, go find it. This piece reminds me of that, and that is very high praise indeed. There's not very much to the picture apart from the shading/ lighting, so that's what draws your eyes. And it just looks gorgeous. Ok there are some messy bits, some of the shading does spill over into the eyes, but the lighting looks so natural and realistic that it doesn't seem to matter so much. The attention to detail is stunning. It took me a few minutes to realise "hey hang on, there's something going on with those eyes, I don't remember seeing eyes with pupils like that in heromachine before". And I was right. Canruth has actually done minute dots of colour and shade in the pupils, which just adds that much more depth to the look of the piece. Even those little fleshy bits in the corner of the eye that no-one knows what they're called (in before someone says it in the comments) look like they've been shaded. And there's the extra bottom lashes. And the shading around the cheek bones. I'd hate to think how long this whole thing took, or how many layers the final piece came to. Well done Candruth.

6 Responses to Character Of The Week: Candruth- Portrait of a Blue Eyed Woman