I've done a couple of covers for Friend of HeroMachine and author Ian Thomas Healy. The next book up in his "Just Cause" series is a more humorous super-hero story titled "Jackrabbit". We thought it might be fun to include you all in the cover design process, so over the next couple of weeks I'll be making posts here about how it's going.

Ian already knows that he wants a cover featuring a comics-style illustration of the main characters, as those tend to sell better. Given that, the first step is to take their descriptions from the novel and create visuals. From the draft version of the novel, here's how Ian describes the creation of Jackrabbit's outfit:

Spence whipped out his sketchpad and rattled off a design. “I’m thinking something in a single, solid color. You don’t want a grim, night-time avenger look, so black is out. White will get filthy in just a few minutes of leaping tall buildings in a single bound. How do you feel about a nice brown?”

JJ looked at his own skin tone, what he might have termed a nice brown. “I don’t know. You’re the costume expert, not me. Isn’t it going to make me look naked, though?”

“How is that a bad thing, chocolate sauce? Brown will show off your body contours very nicely, in both artificial and natural lighting, plus it’ll hide the dirt.” Spence spun around the pad to show JJ. “What do you think of this?”

Leotard. Ears. Pixie boots. And a puffy cottontail. “I can’t wear that! I’m not going to be a superhero who looks like a Playboy Bunny!” JJ rolled his eyes.

“What’s wrong with that?” Spence started a new sketch. “Did you like anything about it?”

JJ shrugged. “I guess the ears were all right. I mean, I might as well look like a rabbit. Leo would approve of that.”

“That’s a really long story,” said JJ. “And let me just say absolutely no tail on the costume.”

“Oh, come on,” cried Spence. “I’m creating art here. You have to give me something to work with.”

“I said you could keep the ears, but no tail. I’m nobody’s pin-up.”

“Says you,” grumbled Spence. “How about this one?”

“That one’s even worse. It looks like I’m naked.”

“No, you don’t get it. This a single-piece bodysuit with an integrated hood and full-face mask. Head to toe, like you requested. A lovely, warm brown all over. With ears,” said Spence.

“Isn’t that kind of boring?” asked Bunny. “Where’s the panache? Where are the bangles and baubles?”

“Nothing like that here,” said Spence. “The panache isn’t in the outfit; it’s in the man wearing it. This is a costume that says I’m not afraid of anything. It calls attention to all the right parts; first and foremost the attitude.”

JJ considered the illustration. It would hide him as well as anything. He could see himself bouncing around the city in a getup like that. People would see it and think rabbit without having to stretch their minds. It was almost clownish the way the mask covered the face, leaving only the lips and eyes uncovered. He tried to make sense of Spence’s scribbles in the margins, but they were in some kind of bizarre costumier’s shorthand. “I think I like that,” he said.

“Wonderful.” Spence trotted into the back room, returning a moment later with a handful of color swatches. He riffled through them, discarding those of the wrong color or material, until he had only two left. “The suit will be bi-layered,” he said. “This will be the interior material. It’s soft, hypo-allergenic, and will help your skin to breathe. It will also wick away perspiration so you don’t have unsightly stains on the outer layer.”

“Is that a problem?” asked JJ.

Spence looked aghast. “I’ve been designing ballet costumes since I was ten years old. You wouldn’t believe how much ballerinas sweat, and these skin-tight costumes show everything.”

“The inner layer also will house the framework for the ear supports, eye shields in the cowl, and a cup.”

“Every superhero should wear a cup. You only need to get kicked in the cojones once to realize that.”

“Oh. What are eye shields?”

“Superheroes should have white eyes without pupils. And they should also have eye protection from dust, flying debris, and other nonesuch. I’m going to use the lenses from safety glasses. They’ll look clear to you, but when light shines on them, they’ll appear white to anyone else.”

Spence continued. “This outer layer will be sheer and give the appearance of fine fur, like suede or velour. Rubber-soled boots will be incorporated here, and texture pads on your palms and fingers so you can hold things. Football players use them.”

And Here's what I came up with based on that: 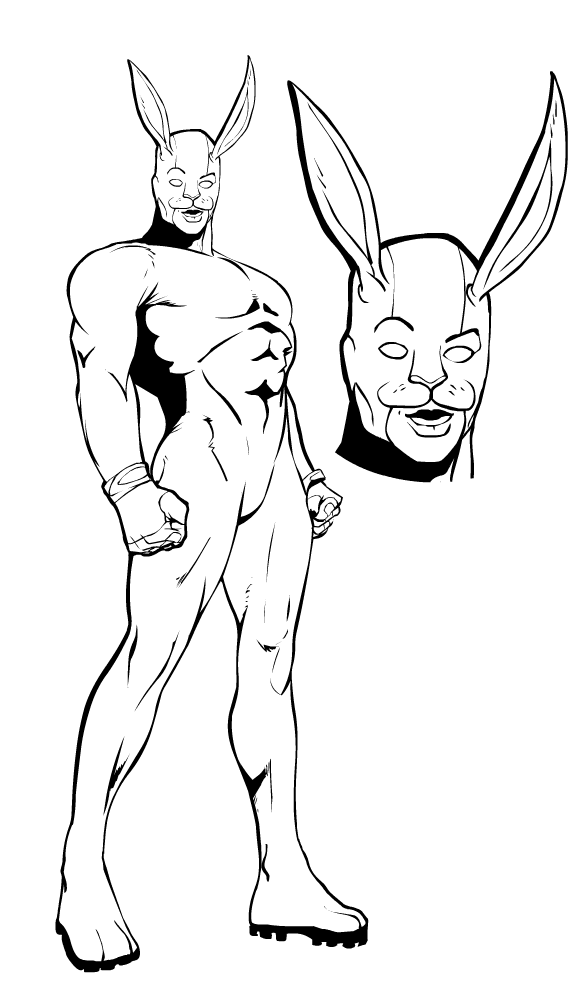 The other main character likely to appear somewhere on the cover(s) is Jackrabbit's partner, Bluebird. I didn't get as fulsome a description from the book on this one, but luckily Ian and I had the same basic vision. Here's here basic look (and yes, two HeroMachine 3 items serve as the baseline on this, since it's just for the design of the outfit shortcuts make the process much faster): 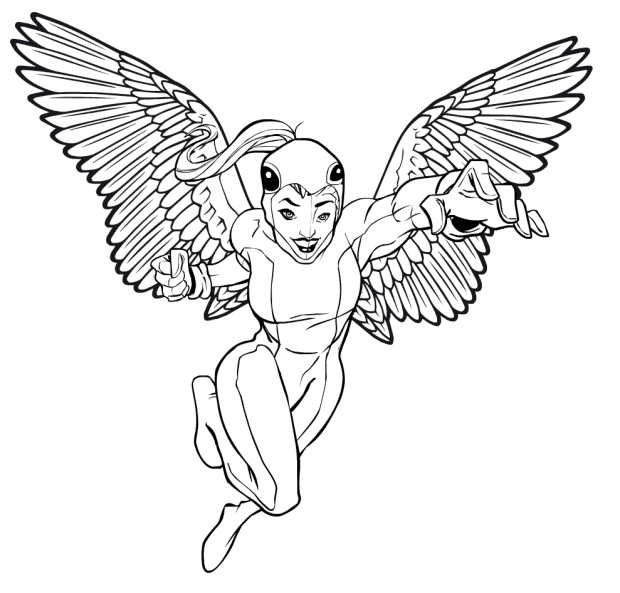 So those are two of the main elements I'll have to try and incorporate into the design. Let us know what you think!

This entry was posted in Cool Characters, Previews, Sketch of the Day, Super-Hero Stuff. Bookmark the permalink.