Character Of The Week- 17th August

When looking for a subject to cover in character of the week I always try to find something different, someone who I haven't covered before or even recently. However, this week it seems I have been unable to do so, due to the fact Jeimuzu exists and is doing stuff like this on a constant basis. 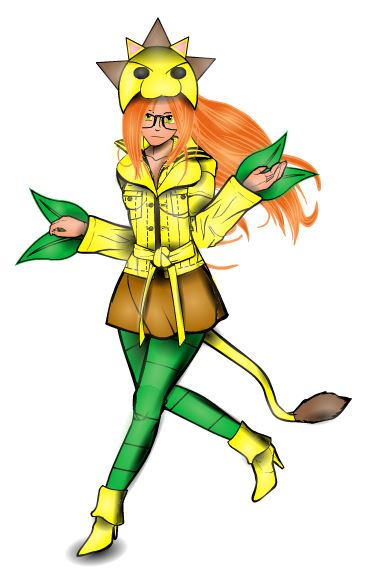 There are lots of things that caught my eye about this creation in particular, starting with the costume, which is kooky to say the least. I love the hat and the leaves coming out of the sleeves, which both tie in with the characters name; Dandelion. She certainly has a unique style, much like her creator.

The colours used enhance the character brilliantly, only needing three (major) colours for the costume and two for the body/ hair. The costume colours were well chosen to tie in with the name and costume, with the main focus being on the yellow, which alongside the green of the leaves and leggings and the orange of her hair, gives the character a very vibrant feel.

The face was the next thing to catch my eye. Very nicely understated and quite pretty, she looks like the kind of girl you could expect to see dressed in that fashion at some sort of anime convention. She doesn't look aggressive or overtly sexual (which seem to be the two main categories for super heroines), she looks relaxed, which would certainly be unnerving and strange for anyone facing her.

Finally the pose, which has a very nice movement to it. The fact that she is not really running, but more skipping towards her next adventure adds to the quirkiness of the design. Again, it gives the impression of relaxation around the character, that she's not really worried about having to do all the super heroics, which I think is a nice way to look at it.

3 Responses to Character Of The Week- 17th August