Someone page S.I. stat, we've got a swimsuit emergency!

You will hardly ever hear anyone say that the scaly underwear look beats whatever else you might drag out of the closet. But in this case, it applies: 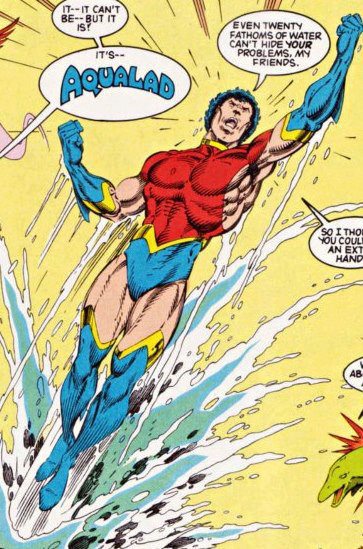 Apparently there are strippers in Atlantis, because it looks like Aqualad mugged them to steal their boots and gloves. The choker isn't helping that impression any, either. But I want to get past the idea that the future ruler of the seven seas might possibly be a secret cross-dressing mugger and ask Aquaman how he and his wife's blonde and red hair, respectively, resulted in a child with a black Afro.

No, wait, that's not at all what I wanted to ask. The real issue here is not "Which of the Royal Atlantean Guardsmen has kinky dark hair" but "How in the name of Poseidon does that shirt stay up with no armpits?" Does he Super-Glue the part that's over the deltoids? Did he command two starfish to reside there permanently, desperately holding onto the spandex with all five legs?

Regardless, I'm pretty sure the fish's cut-off dialog in this panel reads "Verily that outfit is about ten kinds of Wrong!"

On the other hand, I bet that metal belt is handy for holding the one dollar bills that routinely get shoved in his face.

(Image and character ©DC Comics and via The Vault of Buncheness.)

13 Responses to Someone page S.I. stat, we've got a swimsuit emergency!