As if you needed another reason to hate the Nineties

In 1996, the two big comics publishing companies realized they could elevate their characters to a whole new level by doing what was essentially a series of mashups. In a hybrid effort labeled "Amalgam Comics", they merged characters from each imprint into one hybrid being. For instance, the main mystic characters from each line merged to become "Dr. StrangeFate", a name I bet took at least three seconds to think up. At least, you guys. Also it was the frontrunning title for the "Dr. Strangelove" sequel, but shockingly that never came to fruition.

To be fair, somewhere under the deep cynicism of the entire concept was the nugget of a neat idea. Unfortunately, it happened during the Image Nineties, which means -- say it with me now! -- it had to be EXTREME!!!1! Hence we got the Batman-Wolverine abomination known as Dark Claw: 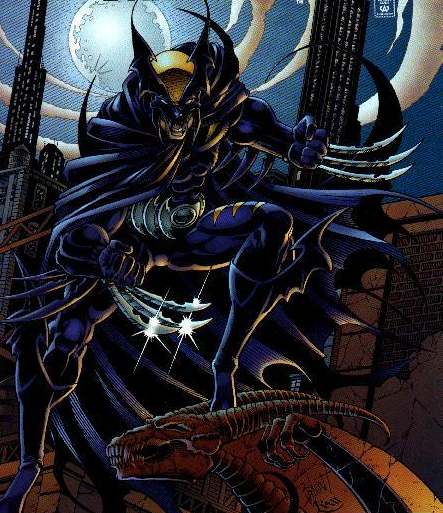 It's Wolverine's helmet but with Batman scallops! It's Wolverine's claws but with Batman scallops! It's Batman's cape but with ... ok, that one stayed the same. They did take the iconic Wolverine massive hair wings and apply them to Batman's boots, so at least Logan has that much influence in the costume design department. Naturally you also have to have the ripped clothing, because MTV.

I honestly don't know what the hell is going on with that belt buckle. Did Captain America slip in here somehow? Because you could definitely deflect bullets with that thing.

The worst part of the concept is that this guy is now unkillable, no matter how bad his outfit is. And that's bad for all of us, people.