No character in comics history has had as many distinctive costumes as Wasp from The Avengers. The fashion-forward Janet Van Dyne likes to look good when she walks (or flies) out the door, so you're as likely to see her in the latest haute couture creation from Milan as a powered suit of shrinking armor via Tony Stark. In fact, you can see all of them at this amazing site, comprising page after page of her clothing choices.

But one character design in particular jumps out as just awful. Apparently she was brought back from the dead somehow (comics, everyone!), only as a result she got transformed into ... well, this: 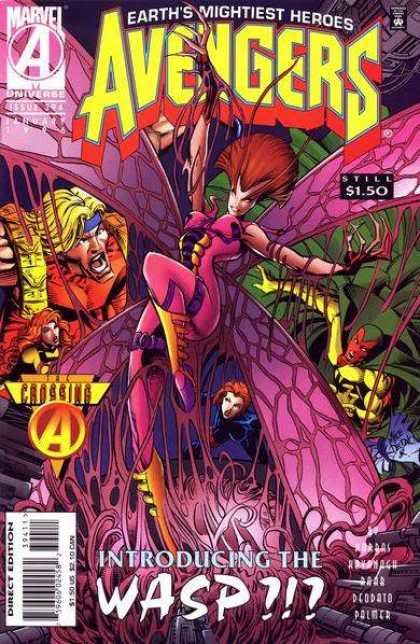 When I say "Insane, improbable, inexplicable hair", I want to be sure you understand what I mean. So I found this great shot from the rear:

Apparently she got too close to The Red Tornado during the last JLA-Avengers crossover and her mohawk got blown sideways. Seriously, you could scoop salsa with that thing.

And lest you think this is the most egregious booty call in Wasp costuming history, let me disabuse you of that notion right away:

Despite how it looks, that's actually just the Marvel version of the Cosmic Boy Naked Bustier Effect from the Legion of Super-Heroes at DC. I'm pretty sure if it were what it looks like, it would actually be a better costume design.

So there you have it, people, the worst costume Janet Van Dyne has ever worn. Luckily the madness of the decade eventually passed and we could all get back to her spending more time in Macy's hunting sales than in the Avengers Mansion turning into a bug.

(All images and characters © Marvel Comics.)