You might think the new movie "Battleship" represents some appalling new direction in "creativity", as it builds an entire movie on a game you used to play when you were five years old. But basing lousy ideas on games you used to like as a child with no relevance to the new medium is not a recent innovation. Oh no, my friends. For instance, there's Marvel's character "Quantum" who at one point based his visual identity on the game of "Jacks": 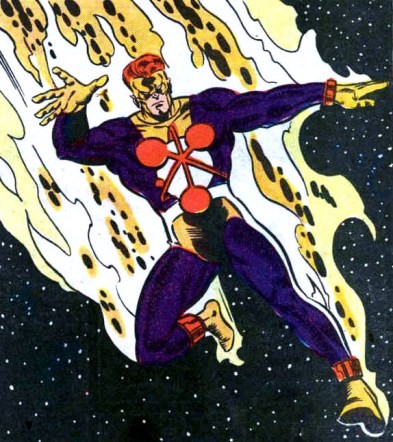 I do like the unintended(?) side-effect that if the jack was just a bit larger, all of his naughty bits would be covered. Then they could dispense with all other clothing, change him to a her, and have every single other super-heroine outfit!

Regardless, if you take the ill-advised creative direction of designing based on old games, and you're an adult male running around in spandex, you probably shouldn't go with a game that involves getting "picked up". I'm just sayin'.

12 Responses to Games as costumes