My main problem with Quasar's costume is the combination of the headpiece and the cape: 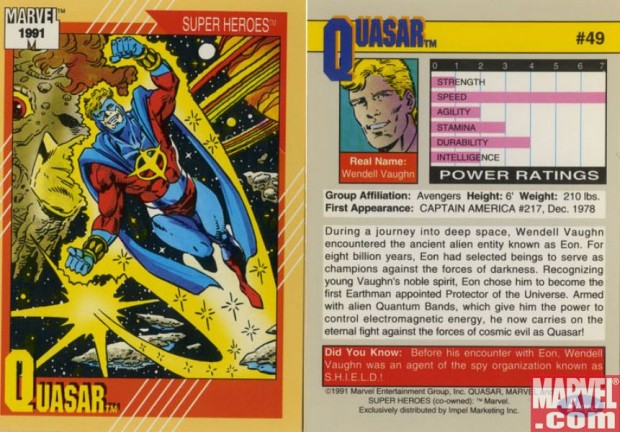 The cape portion covers his shoulders and upper chest, and looks full, heavy, and massive. Combined with the chin covering I feel like his entire top half is weighted down. Leaving off the crown to expose his hair adds to the confusion: though you'd think it would free up the claustrophobia, in a strange way it contradicts the feeling of the cape and creates some confusion, at least for me.

I do like how the interior of his cape reflects space, as if it's some kind of portal. But otherwise the colors and other bits lack imagination and style, leaving me a bit cold. Plus having bracelets on top of full gloves is weird, like my "two boots" aversion.

Overall I'd give Quasar a "C" for a couple of nice elements offset by a dull design and a suffocating top half. How about you, what would you say about this costume?

18 Responses to The Reason Quasars Exolode