The baddest Big Brother yet

Courtesy of "Gone and Forgotten", I've learned that Luke Cage might have the worst-dressed Rogues' Gallery of all time. Take "Big Brother" for instance: 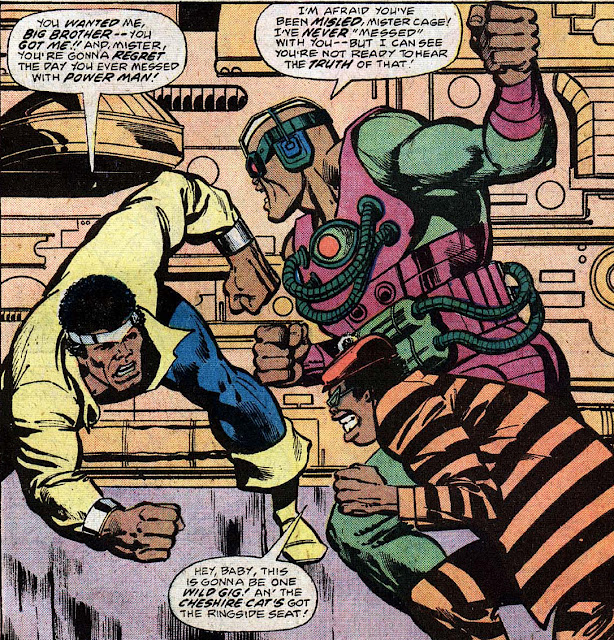 You have to wonder what kind of nefarious criminal enterprise requires sucking all the nipple-power out of both man boobs, channeling it back into the body via an invasive metal tube, and re-outputting through a single massive chest-eye-meganipple orifice. I do know this, however -- I don't want to be there when whatever it is comes shooting out of that thing.

Apparently recapturing his own body's effluvium is what Big Brother is all about (no wonder he's watching you, he wants to know if you're watching him!), as he's also got that nifty Mark V FlatusVac strapped to his abdomen. Again, you do not want to be present at the moment of discharge.

I'm guessing that the FlatusVac doesn't come with a noise dampener, though, requiring the use of huge 1970s headphones. So massive are his discharges that said headgear has to be strapped down with a metal bar to prevent it from flying off his head upon release. Now that's announcing your presence with authority, folks.

I'll overlook the purple and green color scheme, as his eyes are probably watering so badly he can't see straight. But his buddy the Cheshire Cat has no such excuse. It's like he took a look through Prison Fashion Weekly Magazine and thought he could really dress up the black bar look by throwing in some cat-puke orange and a red beret.

I haven't read a lot of Luke Cage comics, but I'm going to guess that most of his super villain troubles are direct karmic blowback for that popped yellow collar and bare-pecs look he's sporting. Can't we all just dress well and get along?!

11 Responses to The baddest Big Brother yet