I don't know a lot about Marvel's "New Universe" initiative from the late Eighties, but I do know that if there was more than one character as badly dressed as Psi-Hawk, it was doomed to fail no matter what: 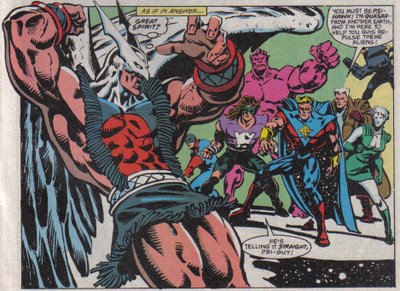 If you're the main feature in a "Upskirt Hot Shots of the Marvel Universe" calendar, you're in trouble. When you combine the man-mini-skirt with the fringe, both there and on the bare-armpit leather vest, I think you're asking a lot of your enemies to be intimidated by you.

I like to think maybe that's why he went with the all-metal Extreme Batman/Wolverine Spikey Eyed Visor Helmet. Although, maybe that's actually just tin foil he donned in an effort to keep the voices in his head from making so many rude comments about the rest of his ensemble.

This particular costume variation is from a later crossover series of some sort, but he also had a regular outfit he sported: 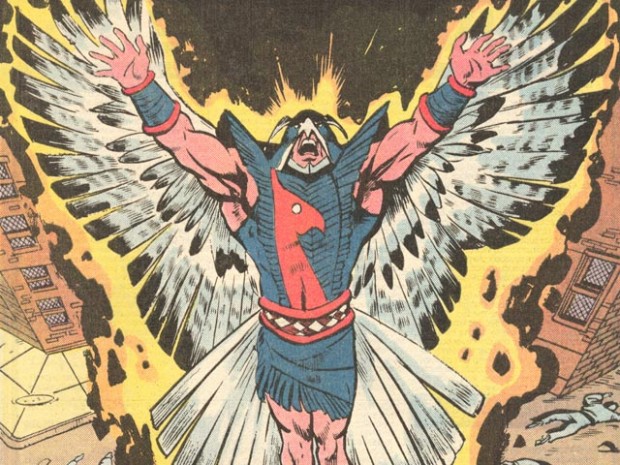 At least this one has his ribcage covered, and the hawk helmet thing doesn't reek of the Image Nineties. But I have to take points off for that big red doohickey on his chest, which I'm assuming is supposed to be a hawk of some sort. If that's the goal, then I think someone needed to take a trip to the local zoo, because that's a lot more like a strangled ostrich or the guy in the cube next to you's hand-shadow-puppet than it is anything like any raptor I've ever seen.

Either way, it looks shocked as hell, which given the fact that it finds itself on the deck of a fringed mini-skirt-wearing Hawkman wannabe is understandable. I mean, if you're going to copy another hero from another company, set your sights high, don't settle on Hawkman for the love of Pete. And if you do, then by the spirit of Project Runway, at least end up dressed better than him!