There's a reason you're alone

Our Bad Super-Hero Costume of the Day belongs to a short-lived Golden Age character called "The Lone Warrior": 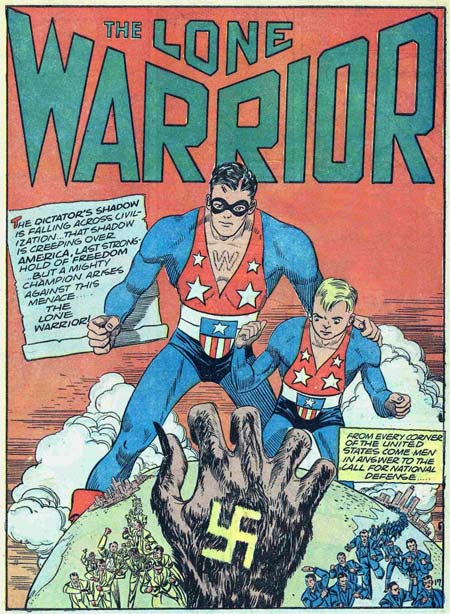 I hate to get all grammatical on your patriotic self, but you can't call yourself the "Lone" warrior if you have a sidekick. Maybe he thought if he dressed his little buddy up in exactly the same costume (except for the mask -- apparently he doesn't care if his freakishly disproportionate underage assistant gets identified), no one would notice the discrepancy.

Of course he has his own problems in the "secret" identity part of the super-hero gig, since instead of making his insignia part of his costume, he's opted instead for a daring down-to-the-navel plunging neckline revealing the scar-tissue "W" on his chest. Luckily the medical wing of the 1941 Army was too busy to notice the exact same scar-tissue "W" on the chest of their latest recruit, who also was so strong he ripped apart the strength-testing machine. Batman, this guy ain't.

The costume itself looks like he mugged a wrestler on his way home from a really bad party, and I can't help but wonder how the blue sleeves work. Is it a one-piece top with the arms sewn in, or is it an actual wrestling unitard with a bizarre undershirt of some sort?

Either way, I can't tear my eyes away from the huge shield hovering right over his crotch. The colors and the collar and the white belt make it impossible to tear your eyes away from the region. Which might have been his intent, except then I can't -- or won't -- imagine why he'd give his little buddy the same look.

Did I mention the sidekick is actually his brother? Yeah, eww, that's what I said too.

17 Responses to There's a reason you're alone