We've had a bit of a running debate recently over the costume worn by the 1940's comic book hero, "The Green Mask": 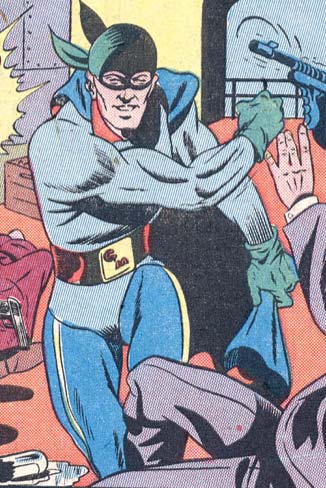 Personally, I think that overall he's got a pretty sporty look. I dig the tied back Zorro-style mask, the piping on his legs, and the roll-top gloves. I admit the colors are a bit much -- green and yellow and red and light blue and dark blue -- but at least they're muted in value so they don't leap up and poke out your eyeballs.

However, I'm posting him here on "Bad Costume Wednesday" because of his belt, which is new to the "second edition" Green Mask that was more of a Captain Marvel rip-off instead of the earlier Batman rip-off. In this version, a young boy turns into Green Mask (I think they dropped the "The" from the name) when he a) gets angry and b) says the magic words, "EEEOW". I'm not making that up. Whereas Captain Marvel turns into the mighty Shazam by uttering a name made up of the first initials of the Greek pantheon of gods, Green Mask has to make like a cat with a harelip.

Getting back to the belt -- if you have to run around with your initials on your navel like an absent-minded school boy afraid of losing his coat, you've got yourself some trouble. And call me a traditionalist, but if you have a color in your name, you ought to use that color in your logo. He's not "The Red Initials", after all.

I also don't quite get the value of having piped trousers beneath your unitard. Pants go over your underwear, big guy -- even Billy Batson didn't make that mistake.

12 Responses to The Green Mask Dialogs