The right to bear arms … lots and lots of arms

You'd think with fifty pairs of arms, at least one would be left-handed. But no: 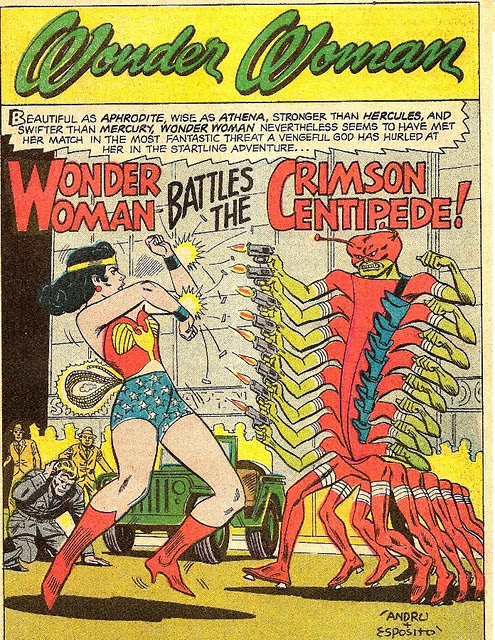 How the hell do you even put on a costume like that?! And if you say "One leg at a time ... a hundred times in a row" I'll throw my bracelets of submission at you!

Given the recent discussion over a certain disgusting movie involving humans and centipedes, and given the sordid S&M nature of Wonder Woman's past, I can't help but feel icky and like I need a shower. But I bet the guy who came up with the movie read this comic. If so, whatever else you say about the guy, he at least had the good sense not to have a costume involving fifty pairs of footy PJs, overlapping gun holsters, and what appear to be suckers on the bottom of the feet.

On the other hand, even the Crimson Centipede, lame as he is, knows better than to leave the house in star-spangled Granny panties. So there's that.

(With thanks to "Again With the Comics".)