Neither black nor knightly

Granted this is incredibly obscure, but I think it illustrates a fundamental principle of super-hero costuming that I had to bring it to your attention. One of the primary rules of designing an outfit for your character should be that your costume should have something -- anything -- to do with your name. Witness the debacle that occurs when you violate this simple rule with the Golden Age villain "The Black Knight": 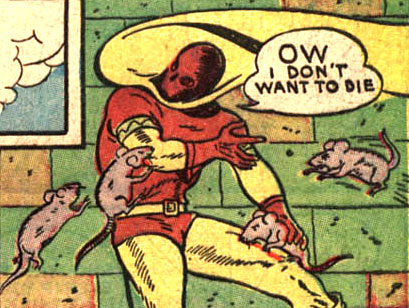 Note that the costume is neither black nor knightly. At least, most knights I've seen wear metal armor instead of leather, don't sport a full-on executioner's hood (in cheery fire-engine red, no less!), and a cape. Plus, of course, they're not usually afraid of rats.

If you didn't know this guy's name, you'd never guess it from looking at him. And that's not a good thing in the iconic world of super-heroes, folks.

(The kind person who forwarded this on was Frevoli! Many many thanks, Frevoli!)

27 Responses to Neither black nor knightly