Remember those triplets you imagined dating all at the same time, and how awesome that was? Or how about that triple-scoop sundae at the ice cream shop -- awesome, right? Good things come in threes, my friends, which makes this announcement even more fantastic:

That's right, the time has come again for an all-out, knock-down, drag-out fight pitting your creativity directly against other HeroMachine faithful in a week-to-week slugfest.

Here's how it works.

You have two weeks to come up with five HeroMachine creations. Starting on Friday, September 23, I will post all of the "Play In" entries in one big cage-match poll. On Friday, September 30, the top 16 vote getters will face off in a series of head-to-head matchups in traditional tournament bracket fashion. On Friday, October 7, the eight winners of each bracket will face off in another round of head-to-head matchups, and so on until we have one overall winner.

Everyone has a shot at getting into the tournament. Who actually does will be decided by the community at large, removing me as the gatekeeper.

Which brings us to the subject of "Theme". Your challenge in this Friday Night Fights is simple: 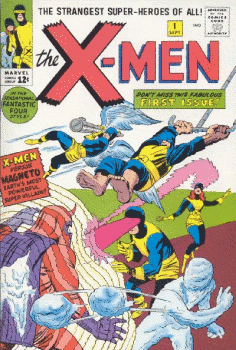 The concept here is that you're assembling a super team long the lines of the original "X-Men" or the " Dynamo Five", but who should share some sort of identifying team identity. Maybe they all have the same colors, or share a logo on the belt or chest, or have some sort of common fashion design like a high collar. Something so that when you look at them in a group, you can clearly tell they're all on a team and not just super-powered people who happened to be caught standing next to each other.

In terms of the team members, they should fit into the following five broad character archetypes, all of which must be present on your team. I'll use the X-Men as examples.

That's also the order the contest will go in -- Gadgeteer is the play-in round entrant, followed in order by the rest, one per week.

Here are the rules:

Hopefully that makes sense. To clarify a bit, here is the bracket, along with each week's character (not including the "Gadgeteer" play-in round): 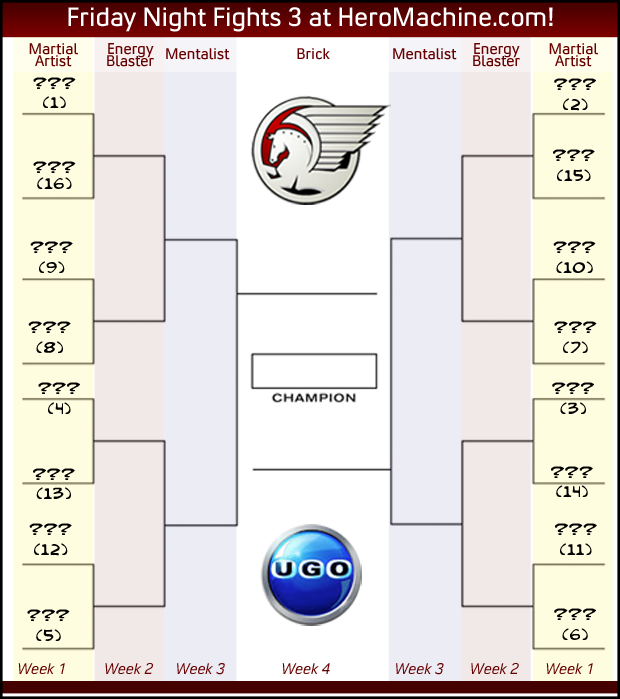 If you have questions, please speak up in the comments. And good luck!

89 Responses to Son of Son of Friday Night Fights!