When I think of "aquatic super character", the image of bad Eighties Hair Bands like Whitesnake and Poison immediately comes to mind. Because nothing says "sleek, aquiline, water-based power" like wild, out of control locks with tons of fixative, a connection not lost on a Nineties-era Marvel Comics desperate to catch up with Image in being EXTREME! 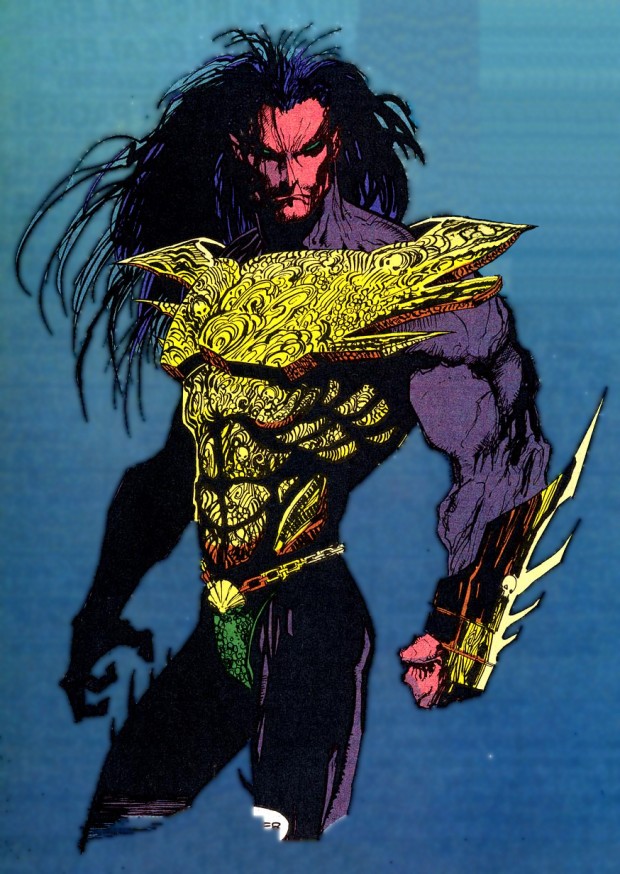 I mean, just look at your water-born powerhouses in nature, like killer whales and great white sharks and even the sleek, clever dolphin. They ALL have big hair. And spikes. And massive amounts of metal guaranteed to plummet them directly to the bottom, where they'll stick in the sea floor like an out-of-control game of Lawn Darts.

Seriously, can you imagine actually swimming in that thing? I think they must have gotten the inspiration for the intricate scroll work from recovered shipwrecks, but the thing is, those ships were designed to float on the water, not swim in it.

But just in case lots of spikes and big hair and brooding eyes and a daunting pose weren't EXTREME enough for what Marvel must have seen as its dim-witted readers, they were sure to include chains and skulls in the details. Nothing's more EXTREME than skulls! Unless it's a chain-linked thong of scales. I know when I see a fish in a thong, I'm immediately intimidated.

My favorite bit, besides the dark and brooding face (reminiscent of a Sinestro-Dark Elf love child) is the big arm gauntlet. I know that if I were considering a career in surface-conquering, I'd want some kind of glove that completely immobilized my wrist. Now that's EXTREME!

(Many thanks to reader Dan for sending this in! Image and character are ©Marvel Comics.)