Today I am pleased (horrified?) to give you what may be the worst costume I have ever seen. In a delicious twist of irony, it is worn by Kitty "Pryde", though after being forced to appear in public like this she probably changed that last name to "Weeping Shame". Witness the devastation, my friends: 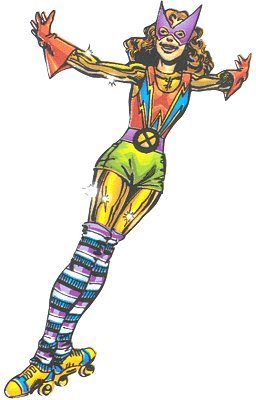 I'll give you a moment to recover your eyesight and your sanity.

My theory is that this Kitty is actually a twisted alternate-reality love child of Sixties-Era Marvel Girl and Dazzler, whose mutant X-Factor is sartorial suckage. There's just no way an unpowered human could come up with something that bad. I mean, I'm counting eight colors in this outfit, and not one -- not one out of eight! -- is good. From the metallic gold unitard to the spoiled-tomato red to the actinic blue to the baby-vomit green, it's a non-stop chromatic assault on the eyes.

In fact, so thorough is the awfulness that I I bet those lime-green shorts are made of parachute material so the constant shush-shush sound they make with every step can irritate even the unsighted. When you go to that much effort to offend the senses, you don't want to leave anyone out.

If you can get past the ghastly colors (and if you can, you deserve a medal), you realize the actual item choices themselves are even worse. Thigh-high leg warmers? In three-color stripes? Capped by neon-yellow and blue roller skates?! That's so hideous I believe it caused a ripple in the time-space continuum, sending reverberations into the future, engendering a subconscious gag reflexive response resulting in the proliferation of leather spike-heeled thigh boots (see Frost, Emma).

So that's one positive thing to come out of this, I suppose.

And why the hell does Kitty Pryde -- whose power is to become immaterial, I remind you -- have lightning bolts streaking down her odd scoop-necked vest? Can you think of anything less stealthy than lightning bolts?

Not that she's sneaking up on anyone in that costume, of course. Insubstantial or not, I think even the walls would reject someone dressed like that from coming anywhere near them, much less passing through.

(Today's Bad Super Hero Costume comes to us by way of reader Aren, who I both thank and curse for showing it to us. The image is, of course, ©Marvel Comics. Though I bet they wish they didn't have to claim this one.)