When last we left our Lone Wolf, he was standing in a strange tavern, deciding whether or not to confront the dastardly fisherthieves who'd mugged him of all his worldly possessions. The alternative was to ignore them yukking it up at the table and instead chat up the local bartender. By a narrow five vote margin, we decided to go all Crazy Kai on the brigands: 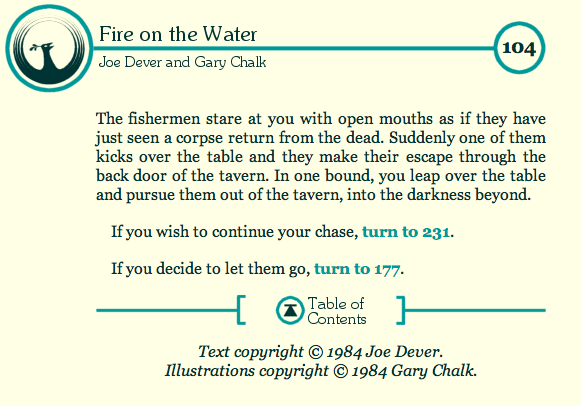 I made a command decision that our last vote to confront these guys meant "see it through to the end", so out into the alley after them we go: 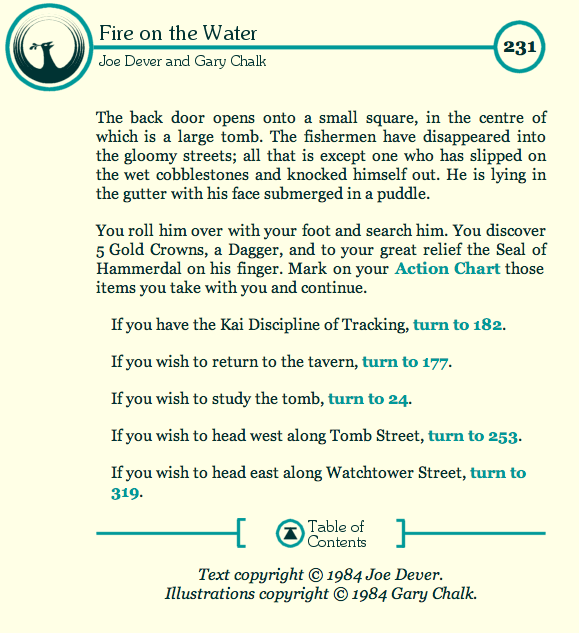 Huzzah! We have the absolutely vital Seal now, and our quest is not doomed to failure before even making it out of this flea-bitten crappy little town! Of course, given the history of the series, it's probable that the next time we turn right instead of left, we'll be crushed by a falling meteorite, but such is the hard-luck life of a Lone Wolf. You'll note that once again, our good fortune comes not because of anything we did, but simple dumb luck. We were too slow to follow them out of a door, and only got our Seal back because a fisherman -- clearly unused to moving about in wet conditions -- slipped on a water-logged rock. We really should mark us as having the "Kai Discipline of Dumb Luck (Both Good and Bad)".

Regardless, I've marked our ill-gotten booty on our character sheet:

We don't have our preferred Spear, but at least we're not totally helpless. We also don't have anything to eat, which, considering the fact that we're in the middle of a town where the Kai Hunting opportunities are likely to be minimal, could potentially be a problem. And finally, if we had a Backpack we could put stuff in it, if we had any stuff. Which we don't.

But we're alive, we have eight coins to rub together, and with the Seal we can at least in theory continue to pursue our Quest! Whatever that is, I've frankly forgotten. This is the same way I play video games -- point me at something to stab and I'm happy, meta-narrative be damned.

Thus, our decision is:

I did not include the first option because we don't have the Kai Discipline of Tracking. However, I cheated and looked at the result, and we're not exactly missing out on anything -- I would have thought you could track the other Fishermen to wreak havoc and holy revenge on their sorry hides, but alas, that's not in the cards.

So what'll it be, folks?

10 Responses to Curse of the Fisherthieves