Gap-toothed farmer's overalls were not meant to combine with Eighties-era Olivia Newton John colors and fabrics. Sadly, in an alternate Marvel universe, such a fashion tragedy came to pass and resulted in this terribly unfortunate Gambit clone: 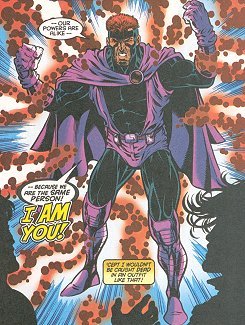 I'm from Louisiana. I've known Cajuns. I'm related to Cajuns. And I swear to you on my father's grave: No Cajun would ever -- EVER -- wear something like this. Not in pieces, not together, not in that color, and certainly not without some sort of matching accessories.

What I'm saying is, that alternate future must not only have featured the unholy Redneck Workout line of clothing from JC Penny's but some sort of soul-altering catastrophe that obliterated what limited fashion sense the people of the Bayou State have in our reality. And these are people for whom an undershirt is considered formal wear.

What I think actually happened is that in this timeline, Gambit accidentally mugged Dr. Polaris from DC's Green Lantern, and stole his boots. From that single terrible mistake flowed all the rest. Now it's socially acceptable to wear a terrycloth vest and purple Daisy Dukes when you're a guy.

We can only pray the Sentinels survived to wipe this devastation from the face of the alternate Earth, or we're all in big, big trouble.