DiCicatriz and I have finished his prize for coming in second overall in the last Friday Night Fights. Here's the character description and visual I was sent: 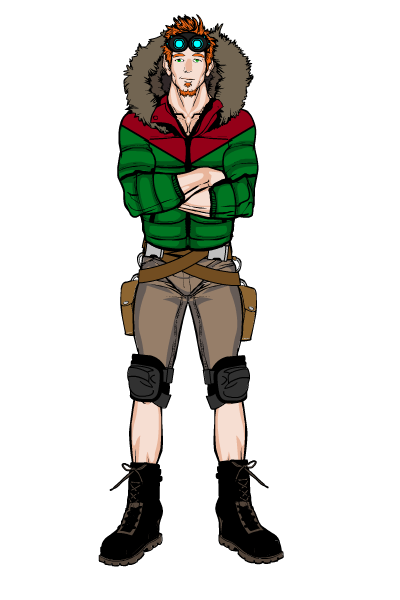 He's a young guy, almost an outdated slacker cliche, with titanic abilities at his disposal. Through a series of unfortunate events he came to possess the chaotic abilities of an Aztec goddess. KC is basically the living embodiment of Murphy's Law. His abilities actively bend probability and manipulate the physical universe around him to cause disasters. His range is pretty impressive; starting around the level of computer glitches and climbing up to earthquakes and hurricanes. He has to struggle to apply this kind of power toward a positive end, but it's part of his character. He's nothing if not a compassionate guy, and he strives to preserve the well-being of those around him.

I've attached my own illustration of him (using heromachine of course!) to give you an idea of what I imagined him to look like. I imagine the goggles, ski-jacket and shorts look a little odd paired together, but his powers affect the weather often so he has to be prepared. Feel free to do anything with it, I just thought if you needed a jumping off point that would be it. Let me know if you have any questions and thanks for the prize 🙂

And here's the final custom black and white character sketch we came up with: 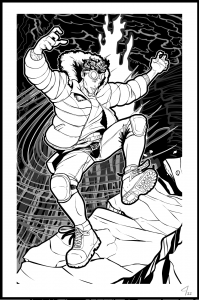 DiCicatriz was fun to work with and I'm glad he was happy with his final sketch. I hope you enjoy it too!

5 Responses to FHF2 Runner Up Prize