Starting at the beginning

The votes are in, and we've decided to go to the Beginning of Time! Because beginnings are a very good place to begin, I reckon. So let's see what awaits us ...

"I'd like to see the beginning," you say. Instantly you find yourself weightless, floating in totally black space! There are no star or suns or moons or wisps of light; no breath of air; no sound; no smell or taste; no up or down or sideways; no motion; no feeling; nothing but silence.

Suddenly a point of light so brilliant it feels like pins driven into your eyeballs flashes and, sooner than you can blink, expands like a million lightning bolts.

You instinctively shut your eyes, but the light is still painfully bright. You move your hands to cover your eyes. You scream -- but no sound comes.

Your eyes have adjusted once again to the dim light of the chamber of the oracle. He is still standing where he was. You feel shaken by your experience. You're not eager to try something like that again, but you are still curious about time.

"Nothing can happen unless time is passing," the oracle says. "But things could happen in another time frame, outside our time. Then another time would be passing."

Your head feels clogged with thoughts you can't absorb. [We all know THAT feeling, I'm sure! -- Jeff] "I'd rather stay where everybody is in the same time," you say.

"That may be possible, but possibly it may not," says the oracle. "Which shall it be for you then, the future or the past?"

"I want to visit another time, but I'm afraid I might end up in a terrible time and place. It might be in the time of the black plague in medieval Europe, or far in the future when the Earth is swallowed up by the sun."

"I suppose so," the oracle says. "But that would be unusual."

"Still, it's something to think about," you say.

The oracle pulls on his long beard. He seems to be thinking, and it's taking him a long time, which is not surprising, for he has all the time in the world!

"All right," he finally says. I'll give you a secret word you can use to escape if you don't like the time you're in. The secret word is 'Juno.'" [Apparently the oracle is a Diablo Cody fan, who knew? -- Jeff]

"But remember this: You may only be able to use it once! Now let's not waste time. Which shall it be for you, the future or the past?"

I have to say, our trip to the beginning of time was kind of a letdown. The oracle seriously needs to upgrade his brochures or something, because if I want to feel like I can't see, hear, or taste anything and that time is endless, I'll just go sit through another showing of "Avatar".

Oooo, I'm gonna pay for that one!

Anyway, here's the graphic from the page where we get our Secret Word: 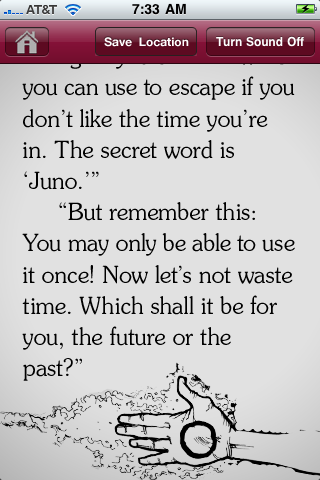 I'm going to have to check my references, but I'm pretty sure he just turned us into Iron Man, complete with palm-mounted repulsor beams. Which is awesome.

Which is a good thing, because here's our decision page: 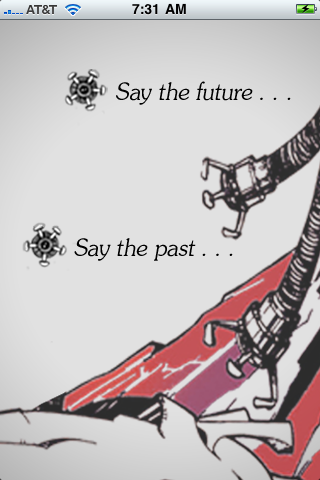 Apparently Doctor Octopus is eagerly awaiting our choice, so it's a good thing we've got StarkTech backing us up. Choose wisely, folks!

This entry was posted in Return to the Cave of Time. Bookmark the permalink.

6 Responses to Starting at the beginning